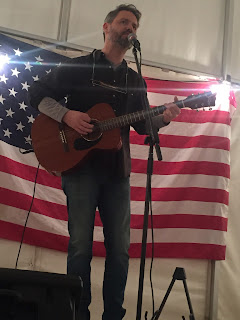 Over the duration of a busy gig year you occasionally stumble upon that moment when all the stars align and the avenues of your mind lead off into the sunset. This can conceivably occur across the full range of situations from arena to house concert. The latest occurrence was perhaps one step up from the latter as this year’s Stephen Simmons Elford gig was held in a marquee in the village’s walled garden. The ‘stop you in your tracks’ moment arrived at the end of the second set when the title number from Stephen’s latest album A WORLD WITHOUT breezed into an encore version of the Townes Van Zandt classic ‘If I Needed You’. How apt that a song signalling the call that ‘a world without art has no hope’ should be followed by one that epitomises the spirit of the beautiful poetic song.

This year’s semi outdoors live music season began early on a cool late April evening deep in the heart of the Staffordshire countryside. Elford Walled Garden is a luscious secluded rural setting converted into a gig venue for the evening c/o of a much needed spacious marquee, and the endeavour of the Hot Burrito Promotions team to maintain their established ethos of bringing top class American roots music to the local community.

Stephen Simmons has been departing his Tennessee home for European shores for a decade now and around half of that time has seen a Staffordshire drop off. Previous visits have included house concerts, garden shows in the warmer months and a conventional venue gig in nearby Lichfield. Each time, a solitary guitar and a ruck of fine songs are sufficient to bring a slice of the South to foreign lands, alongside a voice etched in the country tradition and tales that illuminate the body of his work. This latest show retained the same winning formula, purveying an independent spirit that only answers to a personal calling and maybe to put some food on the table a couple of times.

The latest album reached the UK earlier this year and Stephen wasted little time in picking some of the standout tracks to share with audiences over here for the first time. ‘Puritan Cowboys’, ‘West’. ‘Fairy Tales (The Flowers Burden)’ and ‘Silver Moon Saloon’ all sounded super in their no doubt intended live format, exploring genetic lines, quirky gig venues and other metaphorical observations. The last comment suggests there is some lyrical license to detour in his writing, although Stephen is equally adept at towing the literal line with your straightforward ‘three chords and the truth’. Perhaps Stephen’s style, accent and Nashville links will always paint a country music image when he goes overseas especially when he repeatedly (with no complaints here) shares the Hank Williams cover ‘Wedding Bells’. However there is a wider influence to his repertoire and ‘singer-songwriter with a distinct southern flavour’ is a more accurate moniker. 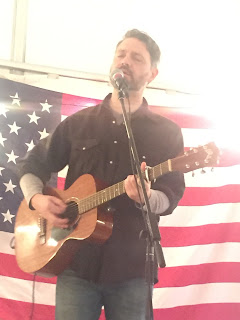 With one eye on avoiding repetition, Stephen tended to steer clear of some of the popular songs from previous visits, although ‘Shirley’s Stables’ did make an appearance alongside a reference to a grandfather’s alleged misdemeanour. Chat did frequently skirt the current political environment as well as the perils of transporting his trusted guitar around. What you also get from an evening in the company of Stephen Simmons and his music is the exposure to a humble self-effacing artist who you 100% believe in. His network in the UK would benefit from growing, but you feel it would have to be without significant compromise. Total integrity is one of Stephen’s charms.

With a view to making this latest Stephen Simmons Elford show a more community focussed event in line with the setting, a local duo operating under the name of Brindley Hunt played a forty-five minute opening set. This was a neat mix of popular covers and impressive originals from a recently released album that possessed the legs to take their act forward. Finding the right environment is always tricky for an acoustic duo, but the assembled gathering in the Elford Walled Garden marquee proved ideal.

The temperature may have just been dipping when the show ended, but the decision to host Stephen Simmons in this format proved a resounding success in terms of fund raising and the quality of artists providing the entertainment. We have got to know the work of Stephen over the last few years enough to expect that much more is still to come. Attending one of his existing shows; considering hosting him on a future visit or just listening to his music would be a wise choice. Many folks will concur and then there’s always a chance of a golden moment, such as that at the end of this gig, will spring up.

Review of A WORLD WITHOUT