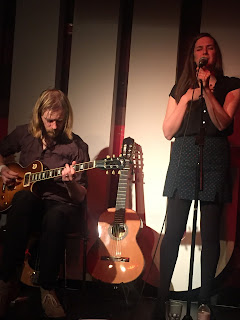 The irony of Josienne Clarke appearing at the Glee Club was lanced on the evening even before a chord was struck, but the temptation to temporarily revive it is too good to miss. Needless to say Josienne proceeded to be in her fine usual form showcasing why Ben Walker and her are one of the preeminent acts on the UK folk circuit. In fact it is tough to identify a better duo where each half executes their specific part to an outcome of blissful excellence so well.

You can take your pick on the many facets of the Clarke-Walker partnership, and the full pack was on show during this return to Birmingham barely six months after their previous visit. Ultimately the sheer beauty of the music is purveyed through the triumvirate of original, cover and traditional songs. The stunning Josienne Clarke solo write ‘The Waning Crescent’ emerged on the evening as the standout original with its alternate theme and supreme soundtrack impressing. The cover of Gillian Welch’s ‘Dark Turn of Mind’ goes a long way to defining the duo’s tone and sets the scene of the Clarke-Walker aura early in the set. From a traditional perspective, ‘The Banks of the Sweet Primroses’ has served them well in the past and continues to do so as this gig evolved into a special exposure of tantalising live music.

Apart from a brace of Josienne’s forays into the world of saxophone parts, the effortless charms of Ben Walker’s sublime guitar playing adds instrumental colour to the Clarke-Walker canvas. His unassuming presence and elegance belies the summit of impact as you are left to marvel at the ease of his approach. Forever inventive and innovative in style and instrument choice, Ben mesmerised both aficionados and those intent on mere indulgence to equal measure as the acoustic, electric and bass format was excelled to a lofty degree. 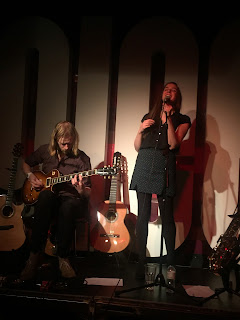 If you were compiling an A-list of contemporary folk vocalists Josienne Clarke would feature high. The emotion, versatility and ability to convey the magic of song all radiate from her vocal presence, displaying a classical style that permeates through to the layperson. Each song chosen to form this twin-set gig possessed such an impact that it was a pleasure to experience this aural delight from close quarters. The Sandy Denny connotation is not going away especially when ‘Fotheringay’ makes the set list and an intriguing version of the Dolly Parton hybrid ‘Little Sparrow’ provided an enhanced touch.

This was the third occasion of seeing the Clark-Walker duo live and it helps significantly if you buy into the Josienne Clarke stage persona. Maybe sarcasm is a touch harsh; irony is probably a kinder compliment. The humour blends well with the unabated melancholy and perhaps adds a progressive maverick element to a product which can sometimes echo a conservative feel. Either way the whole Clarke-Walker package has attracted the signing arm of retro punk label Rough Trade, which put out their superb latest concept record OVERNIGHT in the latter part of 2016. Who needs rules anyway?

Maybe it wasn’t so ironic in booking Josienne Clarke and Ben Walker in a Glee Club after all. Synergy can exist in abstract situations and it would be dull if the world was viewed in a uniform way. Long may their talents be paraded at any venue where appreciative music fans get their pound rewarded tenfold. There may even be hope in Chicago one day!