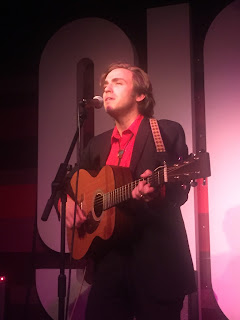 Andrew Combs’ meticulous approach to song writing is reaping dividends. In fact his songs are akin to a sculptor etching each mark on their masterpiece. Over the course of the three albums to bear his name, a multitude of highly crafted songs have radiated in their full glory. Subsequently the UK and Europe has benefitted from numerous visits to promote these records, no doubt on the back of their release via Loose Music. The latest tour is in conjunction with the most recent of these as CANYONS OF MY MIND hit the discerning ear of a record buying public in April.


Once more East Midlands based promoter Cosmic American re-instated their long association with Andrew and on this occasion arranged two shows in their twin bases of Birmingham and Nottingham. It was around two and a half years ago when the West Midlands last made the tour agenda. The first good news is that this renewal in the studio of The Glee Club doubled the turnout to that of the Hare and Hounds in 2014. To build on this enhancement, a full band was in tow, perhaps just missing some pedal steel or keys element. Anyhow those present were treated to a framed sample of what Andrew does best and a decent spread of songs across the three records adorned a set that lasted around ten minutes over the hour mark.

One assertion of seeing Andrew Combs live again is that he works comfortably within the boundaries of both his environment and song style. The sound was finely tuned for this semi-intimate setting with the band only being remotely let off the leash with the penultimate song of the evening, ‘Bourgeois King’. This was a tilt in the direction of a re-enactment of the album version which was in line with the overall feel of the gig. At times you felt you were in a showcase, an experience that is totally valid if you desire an unfiltered listen to an album. However with a view to the limitless appeal of Andrew’s song writing strength, this is no bad environment to be exposed to.

The set rolled out in a simple formulaic manner with the band leaving Andrew to deliver three songs solo midway through. This segment stripped a singer-songwriter down to its bare bones and the impact of listening to these songs in this format was strong. In fact the pick of the set was ‘Rainy Day Song’ from this trio; the opener from the previous album ALL THESE DREAMS and introduced as a co-write with Brent Cobb, who happens to be visiting Birmingham later this month.

Another deviation in the song delivery was the playing of ‘Emily’ towards the end of the set. This rolls out as one of the upbeat numbers complete with an audience friendly chorus, fondly remembered from when Andrew thrilled an arena gathering during his surprise inclusion on the 2016 Country to Country Festival line up. 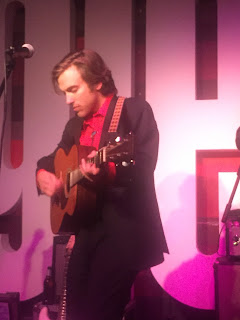 From the new record, the Glenn Campbell-esque ‘Rose Colored Blues’ opened the set and appealed high alongside encore choice ‘Hazel’. We were also treated to a couple of tracks from the aforementioned previous album with ‘Suwannee County’ taking the gig crown of a song  elevated to another level by a live rendition. Generally the chat was kept to a minimum in this concise show, but amongst a series of short insights we learned that ‘Better Way’ was dedicated to his wife and ‘Strange Bird’ was a requested song that rarely makes a European set list.

While there was an element of conservatism in the main set, opening act Paul Cauthen continually pushed boundaries during an extended support slot. The use of a powerful voice and a playing style that breathed new life into an acoustic guitar kept the audience alert during the set. The usual term warm up could possibly be shelved to describe this performance as the temperature control button was continually raised. It was certainly a cut above the level of your jobbing opener and repeatedly threw up images of what a modern day Elvis or Johnny Cash would be trying to do if they were treading the indie boards in 2017. Texas based Cauthen was promoting his latest record MY GOSPEL and the extended preview he gave both it and his style would have certainly done no harm to potential album sales.

CANYONS OF MY MIND has already been anointed the top album title of the year. Where the actual record and gig sits when the dust settles remains to be seen but enjoying the present should be preserved. The album has garnered many enjoyable listens since release and this Birmingham show evolved into an intimate insight into why Andrew Combs is a singer-song writer of the highest calibre. Showcase or gig, the evening was a relevant piece of the 2017 musical adventure jigsaw.