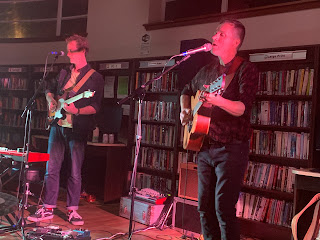 The last time Jacob and Drinkwater paired up for a West Midlands show their latest album was a month away from seeing daylight. Life seems to travel quickly when MORE NOTES FROM THE FIELD is now only days away from its first anniversary. That show was at the Kitchen Garden in Birmingham when live music was tentatively re-emerging and the courtyard location partially reflected the times. Almost twelve months later the venue switched to Thimblemill Library in the neighbouring West Midlands borough of Sandwell as Tobias Ben Jacob and Lukas Drinkwater reunited for what will ultimately prove a lengthy stint of twenty five dates. Outside of their casual duo outfit, the pair are ultra active in other spheres and you feel a sense of shared, and sometimes mischievous joy, when back in tandem.

The challenges mount for live music at grass roots level, but dedicated teams like those persevering with a low key arts agenda in Smethwick continue to pull gems out the hat and deliver a stellar service to communities keen on experiencing new acts. For every wise old owl au fait with this music, newbies will always spring up from new venues. For an enterprising and enjoyable ninety minutes, Jacob and Drinkwater teased, entertained and sank their teeth into a multiple array of roots music drawing on facets of folk, singer-songwriter and good old observational pop music. Material started with the current record before stretching back. Songs stuck to an original template before ending like twelve months earlier with a walk around unplugged version of 'Bird on a Wire'. Splendid stuff.

Those new to the pair soon realised that Lukas Drinkwater is a talented multi-instrumentalist. Stand up bass is the usual gig go-to, but tonight the playing extended to multiple guitars and keyboards. Tobias Ben Jacob majors on the vocals and a more focussed acoustic guitar. Together they gel really well and never fall short of delivering a fine show. 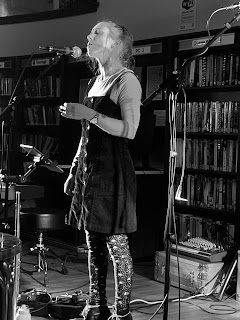 It is good that these Thimblemill shows are going back to having a local support artist. Michelle Holloway is more known for her role upfront with Birmingham-based band The Bonfire Radicals. However she is keen to progress as a performing a cappella vocalist and used every second of the forty-five minute opening slot to showcase her divine vocal skills and how to source an interesting song. The set went down well with the audience and should encourage this sideline to develop.

Shows like this, and the artists at the core of them, possess the tenacity and adaptability to ride out the challenges life throws at live music. Pandemics, economics and enforced mourning may spring up, but grass roots live music buckles down and continues to sparkle.

www.jacobanddrinkwater.com/live for further details of where to catch the pair. 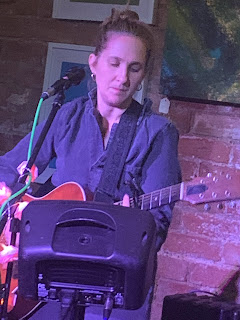 Some artists attain through endeavour; some artists attain through talent. When both are in tandem the road to some sort of desired success becomes a little less out of reach. Of course planned and unforeseen bumps in the road impact a journey that at times can also require a leap of faith. From a distance, the career of Annie Dressner has had a stop-start existence since first emerging as a recording and performing artist in the UK around ten years ago. This Manhattan-raised Cambridge-based singer-songwriter bounced onto the folk 'n' roots scene with an album, EP and shows to boot before a change in life direction heralded an exile from the spotlight. Having began to re-establish herself with a couple of album releases and gradual touring, the next blot on the landscape appeared as the arts took a heavy hit in 20-21. Mid 2022 sees the endeavour and talent of Annie Dressner back in full flow with barrowloads of evidence spilling from her current tour and a stopping off point in Birmingham.

This heavily self-promoted tour has not been short of setbacks. Not every venue has met the endeavour with numbers and just when an inspired tie up with fellow folk singer Amelia Coburn had started to gel, the partnership was broken with an unforeseen departure. Hence folks heading to the Kitchen Garden had a late replacement that ultimately kept the tour momentum intact. Once Annie Dressner commandeered the spotlight the talent takes over and what remains is an effortless show of sublime songwriting cradled in the most compelling of vocal styles. Listening intently is a rare joy as a moment shared is one treasured.

It was a swift move to replace opening acts on the morning of the show, but Birmingham-based artist Jack Goodall heeded the call and used the half hour slot to deliver an engaging set putting his songs and style on show to broaden and evolve. A mix of original, bossanova and cover tunes kept things ticking over, with the latter being a quirky version of The Associates early 80s hit 'Party Fears Two'. Maybe not Amelia Coburn (who has since had her own Kitchen show scheduled for April '23), but art moves in mysterious ways and keeps the antenna regularly tuned.

Annie Dressner named the tour after her current single 'I've Always Been Like This' and duly opened the main part of the evening with a rendition of it. From strumming the opener on trusted acoustic guitar, the set gradually became a carousel of this and a newly acquired electric guitar that added a richness to the sound. Maybe there was scope to inject a little bit more twang and certainly one of the quieter tunes came over better on electric when the playing was more subtle.

Around seventy-five minutes later, the set headed to a conclusion with a cover of 'The Book of Love'. This version recorded on 2020's COFFEE AT THE CORNER BAR album was executed exquisitely with the audience left in doubt to her preference to The Magnetic Fields than Peter Gabriel with respect to this song. This was the sole cover in the set as original song rules the roost including 'Nyack' from the same album of which we were teased to its origin other than a personal place visited in the past. That was generally the theme of the patter as the songs tended to have an air of mystique about them. Chat was often irreverent, a style adopted by many singer-songwriters preferring to let the songs do the ultimate talking.

One thing those new to Annie Dressner would have picked up on the evening was her work with David Ford this year. This resulted in her latest release, a duet EP doing brisk business at the march table. The last song from this record 'Put Me in the Corner' made an ideal setlist addition as despite being a co-write, the solo vocals fitted the bill. Some of the audience was swayed to attend this show after seeing the Dressner-Ford set at Moseley Folk Festival earlier this month. Proof that connections can be made.

Those whose appreciation goes back a little further had a few tracks dealt from the STRANGERS WHO KNEW EACH OTHER'S NAMES record. This debut full length album had a review here in 2013 and from memory songs like 'Fly', 'When I See Stars' and 'Brooklyn' gave a timely reminder to that record's merit. Sandwiched between the first and third albums was BROKEN INTO PIECES in 2018 and this record dished up the highlight of the set in a stunning version of 'Heartbreaker'. This encapsulates the sum of Annie Dressner - the inspirational singer-songwriter - with great lyrics, melody and evocative voice.

With a pointer to the future, a four track EP sampler was made available to anybody buying merchandise on the evening consisting of demo songs destined to make the next album. 'Dance We Do' will have to wait a short while before getting a full recorded version, but it whetted the appetite of folks waiting for the next Annie Dressner album.

The Kitchen Garden rose to the occasion to make this, one of the tour's final shows, a fitting evening. Listening rooms exist for artists like Annie Dressner to prosper and flourish. A healthy gathering would no doubt concur that the endeavour and talent of this intuitive singer-songwriter will advance further ensuring bumps in the road are just minor inconveniences.