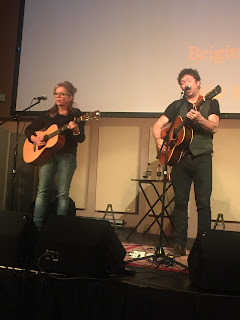 For those with a desire to be enthralled by an outstanding lesson in American roots music dissection, St. George’s Hall, Bewdley was the place to be in the lauded company of Will Kimbrough and Brigitte DeMeyer. This recently formed recording duo was wrapping up their short UK tour in a small Worcestershire town on the banks of the River Severn, although it was music emanating from the Delta and the Gulf waters of the South that inspired an exceptional display of musical craft. The tour was designed to promote the recently released album MOCKINGBIRD SOUL and in their individual styles, Brigitte and Will each played a significant part in the overwhelming success of another exemplary evening promoted by the Music in the Hall team.

Whether by design, spontaneity or natural demeanour, Will generally took the lead in this two-set show, being the most verbally active and thrilling the gathered throng with a guitar picking expertise that totally lived up to the status of its lofty acclaim. The stories, indebted passion and soaked up aura in the soul of American roots music flowed plentifully from the stage as we were led into a mystical world of traditional country, folk, soul, blues and jazz. Brigitte and Will are mere custodians of a lengthy legacy, sharing the bill tonight with the sprits of Hank Williams, Chuck Berry, Alan Toussaint, Jimmy Read and JJ Cale.

While Will Kimbrough’s presence left a distinguished profound indent on the evening, the trademark swampy vocals of Brigitte DeMeyer took your mind to faraway places with their sultry feel. The overall interaction between artists oozed with success especially when the duets kicked in, though generally the vocals worked best in their individual state rather than blended harmony.

Virtually the entirety of MOCKINGBIRD SOUL got an airing during the evening with the album being given a fresh coating when the influences of songs such as ‘Little Easy’, ‘The Juke’ and ‘I Can Hear Your Voice’ were so informatively revealed. When reviewing this album a couple of months ago there was added anticipation of it being viewed in an enhanced state when presented live and this duly proved correct at the evening’s completion.

The general geographical theme of the gig was a sonically mystical axis of the Deep South from New Orleans, Louisiana to Mobile, Alabama. The area seems a natural home for the voice of Brigitte who originally hails from Southern California. Mobile, introduced as New Orleans’ younger cousin the ‘Little Easy’, is indeed Will’s hometown, although the no doubt commercial and infrastructural lure of Nashville, Tennessee is now where both artists reside. We were especially given an emotive insight into Will’s upbringing and family life, which has played a significant part in forming the much-in-demand musician that thrives today. 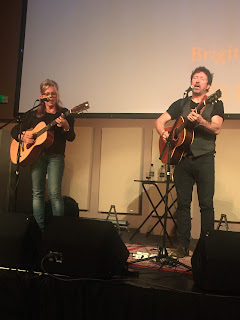 Away from MOCKINGBIRD SOUL (which will surely win the award as the most southern sounding album title of the year), Brigitte dug deeper into her previous records to sing ‘Say Big Poppa’ and ‘Say You Will Be Mine’. Will also ventured into his back catalogue to turn to songs such as ‘Mud Bottom’ and ‘Trouble’ from his Willie SugarCapps association; ‘Wash and Fold’ from his work with Tommy Womack and an excellent story song in ‘Hill Country Girl’ originally found on one of his individual albums. His Chuck Berry tribute was unsurprisingly lively and energetic, while there was no better way to end the main set and fill the encore than with a couple of Hank Williams’ classics. ‘I’m So Lonesome I Could Cry’ was heard in its full glory, while Brigitte put a splendid personal spin on the closer ‘You Win Again’.

In a change from their usual monthly Severn Sessions presentations, the organisers’ elected to enlist only one support act for this show with Ellisha Green filling the joint remit of both local and youth. This was a return to the venue for a college teenager who composes herself well on stage and comes across as a highly promising singer-songwriter. Song writing structure, vocal application and guitar accompaniment have all reached a point where engaging thirty minute support slots are well-received. The next challenge is to further embed a commercial appeal which will help her career progress. This will surely come with time and experience.

Ellisha got a glowing reference from Will when he acknowledged her ‘soul’, an assertion that everyone in the hall would concur with when reflecting upon the whole evening. The word privilege is not an underestimate when Will Kimbrough passes through your town and his hook up with Brigitte DeMeyer is harnessing a cross sectional sound appeal to explore deep parts of the southern American roots psyche. Any remote fascination for this musical art form will have been further fuelled by exposure to two such intrinsic and talented artists whose gifted attributes glide in a similarly entrancing direction.