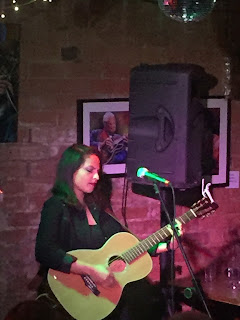 The term ‘Ancient Embers’ suggests something flickering at the end of its existence which is in total contrast to its casual entrance into this Danni Nicholls’ show during her latest visit to Birmingham’s Kitchen Garden Café. Whether or not the new song which hosts this title eventually gravitates to recording status, it was the biggest hint that fresh material is in the air. The added good news is that the song blossomed on its first public airing and that augers well for the possibility of a third full length release in the not too distant future.

There is still plenty of mileage left in the latest record MOCKINGBIRD LANE, despite it being the centrepiece of Danni’s three consecutive Birmingham shows since making her Kitchen Garden debut two years ago. At the point of the first show, the album was still in its embryonic stage short of physical release. Now it has evolved to the extent of being an award nominated album at this year’s Americana Music Association UK celebrations. This is not a surprise to those of us who have bought into Danni’s music since the early EP and Maverick Festival days.

Just like last year’s gig at the venue, Danni was accompanied by Max Milligan on guitar. Max once again did a sterling job, putting on a similar performance to that of Will Kimbrough at a nearby gig a few days earlier. A further connection, apart from Danni showing utmost respect for both guitarists, is that Will’s ‘Goodnight Moon’ appeared on her previous album A LITTLE REDEMPTION and duly made the set list tonight. The selection of songs picked to form a brace of sets spanning the usual mid-gig break was quite similar to the previous visits, but there was little point in changing a winning formula. Hopefully in the future a heap of new songs will make the set selection a trickier choice. 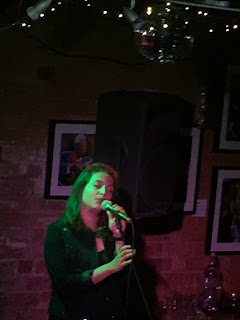 Another consistent feature of Danni’s trips up the M1 from her Bedford home to Birmingham is the increasing trend of audience turnout. This is a testimony to her resolve and ability to reach out to new fans without any compromise to the high integrity of her approach to what can safely be classed as ‘Americana’ music. This term is often subject to liberal bending and stretching, but Danni is as core to its spirit as you will find this side of the pond. In fact she is one of the premium artists attaching an American roots music pin to her style in the UK and will be fully deserved when the bigger stage comes calling.

Meanwhile until those days arrive, there is still much joy to derive from listening to superb songs such as ‘Leaving Tennessee’, ‘Beautifully Broken’, ‘Back to Memphis’ and ‘Look Up at the Moon’ in intimate settings. Those songs have been syphoned off as personal favourite from the evening, but there was not a single poor effort on show. While ‘Folsom Prison Blues’ and ‘Jolene’ will always go down well with a country leaning crowd, perhaps the standout cover of the evening was a version of Randy Newman’s ‘Guilty’. Like indicated earlier, the song selection didn’t alter much from last time. This has a win-win effect in thrilling new fans and presenting the returners with the riches that made them come back.

Opportunities continue to crop up for Danni that intently rewards her impressive and versatile vocal style which can effortlessly criss-cross the American songbook-type range. Coupled with the ability to craft memorable compositions capturing the essence of the country music song writing genre, this makes her a valuable member of a community which doesn’t seek to sacrifice integrity to a misguided quick fix.

The countdown is now on for the fourth visit of Danni Nicholls to the Kitchen Garden Café. Maybe it will be in a year’s time, but the wait will be worth it, especially if further new songs start to appear. In the meantime seek out her music if you have been remiss so far. An opportunity to impress is all she needs.