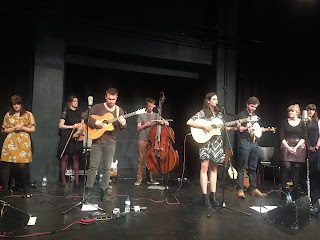 The Bard was present in many forms as The Company of Players took their project into the live arena to road test the sum of many inspired collaborative efforts. Soliloquys mingled with traditional arrangements alongside lyrical compilations, both from an interpretive and original perspective. The usual suspects featured frequently, though innovatively punctuated by abstract takes on Shakespeare’s approach to mental health and refugees. Most significantly though was the ten-strong ensemble of musicians heeding the call to sprinkle their folk music magic on a project commemorating the four hundredth anniversary of William Shakespeare departing this world, thus leaving a legacy which any mortal creator of art can only dream of.

It is just over a year since this group of young emerging folk artists put their busy individual schedules to one side and set about turning a ‘crazy’ idea from Said the Maiden’s Jess Distill into a fabulous fruition of folk fusion. Birmingham’s Crescent Theatre was one of the lucky first chosen venues to host the live version, obviously falling in line behind a showing at Stratford’s RSC. Over the course of an hour and half, twelve new songs were entertainingly introduced, presented and beautifully gift wrapped, leaving a popular traditional in ‘Froggy Went a Courtin’ to be the evening’s parting shot along with its Romeo and Juliet connotation.

The good news is that the recorded version is nearing its release moment with a yet to be finalised late summer/early autumn date. Furthermore its content is a treasure trove of artistic creativity showcasing sizzling harmonies, exalted solos, thought provoking lyrics and crafted musicianship of the highest calibre. A treat awaits those who have pledged, pre-ordered and many newcomers certain to be engulfed in its tempting samples.

The architects of this project were all present for this Birmingham premiere packed with names which are becoming increasingly familiar on the independent folk and acoustic circuit. Already mentioned have been the Hertfordshire based trio Said the Maiden, bringing a sumptuous style of harmony singing coupled with the violin input from band member Hannah Elizabeth and the multi-instrumental talents of Kathy Pilkington. The four other female performers included three solo singer-songwriters in Minnie Birch, Daria Kulesh and Kelly Oliver plus Kim Lowings, who fronts her Stourbridge based band The Greenwood.

The guys may have been outnumbered, but the numerical deficit was a mere irrelevance led by Chris Cleverley in buoyant hometown form on song, guitar, banjo and gag duty. One of his offerings, the mental health inspired ‘Thinking Makes It So’ ,was the song to have been previously heard at his solo shows and his banjo contribution was a key moment in the first half ending with Hamlet in hoedown mode. Sam Kelly spent the majority of the show on mandolin before rising to the song challenge deep  in the second set with the selectively sourced ‘Jessica’.  All musical collaborations need a resolute backbone and it was of little surprise to see in-demand multi bassist Lukas Drinkwater in his regular engine room role.

All song writing participants had their vocal moment in the sun, with Kelly’s refugee angled contribution ‘Strangers’ featuring in the second half and Minnie’s sole effort ‘Up and Down’ doing likewise before the interval. Daria opened the show with the evocative ‘Lady Macbeth’ before settling mainly in a musical role. Kim generally traded in her usual dulcimer for the available piano and the keys accompaniment to one of her contributions ‘The Song of the Philomel’ made a strong case for the evening’s highlight. However at the conclusion this had to be a shared accolade such as the ideals of an egalitarian project.

Whether you approach this project from the comedy angle of Mid Summer Night’s Dream/Twelfth Night; are a tragedy junkie for epics like Hamlet/Macbeth or just a lover of folk music, riches are aplenty. These ten musicians have made a statement that enamoured collaborative projects need not be the domain of those etched into the grain of the genre. The strength of any movement is in its roots and The Company of Players have just solidified this base with an absolute gem.