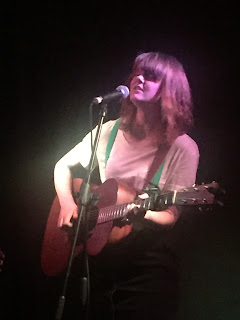 Circumstance and opportunity have recently conspired against seeing Jess Morgan play live, but this seems to have been rectified as the summer months of 2017 open upon us. Ahead of a scheduled appearance at the city’s Moseley Folk Festival on the first weekend of September, Jess made a welcome return to Birmingham as the latest guest of the Nights at the Circus folk operation. The result was a super set providing satisfying re-assurance that Jess is continuing to evolve as a highly effective performing singer-songwriter.


The centrepiece of a set, which pushed the hour and a quarter mark, was a batch of songs from the latest album EDISON GLORIETTE. This record saw the light of day at the back end of last year and has transpired to be her most accomplished effort to date. It was a thrill to hear these songs live for the first time and revitalised an album which heralded many listens plus a glowing review around release time.

The added bonus of seeing a singer-songwriter play live is the opportunity to gain further insight to the songs especially where the lyrical content is highly valued. Throughout the evening, Jess duly provided to mix useful chat with the playing thus shedding more light on songs such as ‘In Brooklyn’ (yes based on the New York borough), ‘Red Rubies’ (rather gruesome eating habits) and the somewhat self-explanatory ‘Don’t Meet Your Heroes’. 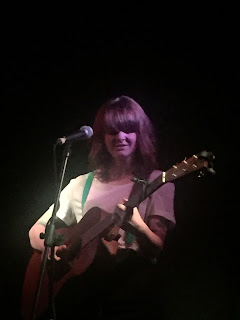 The older material was kept to a minimum with ‘Missionary’ going back to the first time Jess was seen live when she played a gig in nearby Stourbridge in 2013. Like then we learned a little of her African adventures at a time before a busy music life took hold. Perhaps now acquiring the role of oldie status is a firm Jess Morgan favourite ‘Freckles in the Sun’ and it was of little surprise for it to appear as the encore number. The audience had been given the choice of an original or another cover at this stage with the former getting the shout out.

Earlier in the set Jess had made one delve into the work of others with a cover of the Steve Earle song ‘Goodbye’. It was apt that a transatlantic deviance occurred at this point as there is no disguising the Americana influence that is seeping into her music, albeit framed in a firm folk direction. This has led to interest from the AMA UK, and a style possibly garnered from excursions across the Atlantic such as an appearance at Folk Alliance.

On this successful evening held in the upstairs music room at the Dark Horse, Midlands based singer-songwriter Dan Hartland opened for Jess. A regular on the local music scene, Dan was joined for his set by a colleague on double bass and the songs, both old and new, flowed in an affable style.

As intimated at the outset of this review, this was a timely return to the city of Birmingham for Jess Morgan, although her many gigs often skirt the area in the wider Midlands. We know that she won’t leave it so long in the future and it is a given that she will go down well on the Sunday of Moseley Folk, a day where this increasingly eclectic urban festival makes a concerted effort to go back to roots. Until that day at the end of the summer, good memories of this immensely satisfying show will suffice.