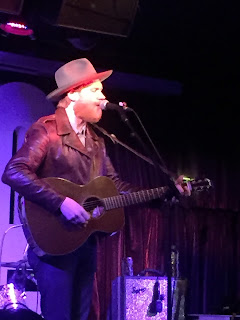 While it has been interesting watching the rise of Jarrod Dickenson over the last three years, what has been missing is that follow up full length release to really catapult him to his destiny. In fact this hugely anticipated record was due to drop in early March in time for Jarrod’s latest UK tour. We will have to wait and see whether the delay is eventually going to herald further good news, but on the evidence of this Birmingham show everything is ticking along splendidly on the performance front.

This is the fourth occasion of seeing Jarrod live in Birmingham since he first supported Diana Jones at the Hare and Hounds in 2014. All the other subsequent gigs have been at the Glee Club, although probably the major boosts for his increased popularity in the city were due to support slots at the larger venues for The Waterboys and Bonnie Raitt. Perhaps a measure for the progression from a headline perspective was a switch in rooms in the Glee Club since last year’s visit, the utilisation of a full band and a turnout showing a massive exponential increase on previous shows.

Joining Jarrod on stage for the five-strong band gathering included his wife Claire on backing vocals and lead guitarist JP Ruggieri, who doubled up as the opening act. This was a pertinent choice as JP did have copies of his upcoming solo album available for sale and subsequently used the half hour slot to showcase a number of fine songs from it. Claire also joined JP on backing vocals, a role she carries out so well with Jarrod especially when she wanders into duet territory on ‘Your Heart Belongs to Me’.

Despite the clear Anglo influence that his life direction has taken, Jarrod still comes across as the quintessential Texan singer-songwriter, cutting a strong figure on stage with precise vocals to match. The sound, especially in full band mode, leans heavily in an Americana/smooth country rock direction with a general polished sheen making it ripe for wide engagement. In fact the overriding effect of watching an effortless performance for just under an hour and a half was an eagerness to get more of his material available in the recorded format.

There were a couple of contrasting covers in the set. First up Jarrod paid tribute to fellow Texan, the late Guy Clark with a version of ‘Dublin Blues’ and a proclamation of what an influence he has been on his career. Indeed this was the second cover of a Guy Clark song over a weekend of seeing two contemporary touring Americana artists play shows; the other being American Aquarium. Towards the end of the set, the band included the widely known and popular number ‘Walk of Life’, suggesting one eye on courting a more mainstream appeal. There is certainly a stylish panache about Jarrod which has the potential to attract music fans from outside the confines of pure Americana.

From detected inter-song chat, references to the new record were seemingly kept to a minimum with only one song specifically mentioned. Like previous shows, old favourites like ‘California (Do You Still)’, ‘Little Black Dress’, ‘Way Past Midnight’ and ‘Gold Rush’ headed an impressive line-up of original songs, depicting Jarrod as a seriously impressive songwriter and a performer equally adept at crossing the line from studio to stage.

On an evening when were subtly informed by JP that Jarrod was celebrating his birthday, the lack of shiny new CDs and shapely vinyl to sell didn’t deter a lengthy line of well-wishers at the merchandise table after the gig. Maybe they were offering a personal happy returns or making further enquires as to the record’s release date.

What was indisputable was that a packed Glee Club audience had just witnessed another first rate Jarrod Dickenson show and an artist who continues a steep climb in presence each time he visits the city. Things are looking rosy for Jarrod at the moment and maybe even better times are just around the corner for an artist of immense eminence.