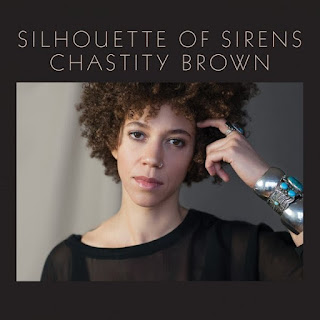 Chastity Brown first came to prominence with the release of her 2013 album BACK-ROAD HIGHWAYS which was met with critical acclaim on the basis of its inherent nature to conquer a multitude of sounds. The good news is that she’s back and in the same dominant form. While there was an impatient wait between the last album release and the inevitable UK dates, this time synchronisation is spot on. As soon as SILHOUETTE OF SIRENS hits the stores, Chastity embarks on a series of dates across the UK and Ireland giving folks an immediate chance to hear a bunch of songs in their purest form.

While all the potential credentials of a successful mainstream artist are in place, perhaps it is Chastity’s distance from interference that ensures a totally personal imprint is stamped on her music. She undertakes all the writing duties on a solo basis and is also highly active in the production process. The result is an album of vast substance, deeply personal and sensitive in its mood-driving tendencies.

From a stylistic perspective, the record is once again the proverbial melting pot of American roots music. A croaking and slightly cracked voice injects passion into each song successful in luring listeners seeking a blues and soul influence. Indeed the opening song ‘Drive Slow’ plays a firm role in defining the mood of this album and the tone is set through Chastity’s vocal presence. You also get the impression that the sound could tilt more in a rock direction and still retain an earthy element. This does happen a touch in the mid album soul stomper ‘Pouring Rain’, a track up there with the best on offer.

If you’re seeking a comparative sound from a similar level act then look no further than when Birds of Chicago are in full flow with Ali Mitchell in the vocal steering seat. Both artists tour overseas on a par and approach their music from a bi-racial stance. This is a critical element to their multi-facetted appeal which seduces fans open to a blended approach.

A clear stand out track on this album is in fact an older piece and one which was core to Chastity pushing her music when first touring overseas in 2014-15. ‘Colorado’ is the song in question, a highly addictive melody pleasing number that was the chosen tune to showcase when invited to play on Jools Holland’s BBC Later show. Its eventual slot on this album is a welcome inclusion and should be a popular crowd pleaser during the upcoming shows.

So far the opener and two strongest mid album tracks have been mentioned. Like all meaningful albums, the closer also plays a memorable role with Chastity significantly lowering the volume to pour everything into ‘Lost’. Inevitably the lyrical content has much to reveal, although it will take a few spins to get to this aspect as first and foremost the vocals and sound tend to major on the initial impact. However like all records of this ilk, any throwaway tendency is nowhere to be seen and the listening location could quite easily be on a long drive or at home during a relaxing moment.

SILHOUETTE OF SIRENS is a continuation of why Minneapolis based Chastity Brown should be an artist to seek out. It has been helped along via a release on the Red House Records label and bears the hallmark of a record that will resonate with an increasingly wider audience base.