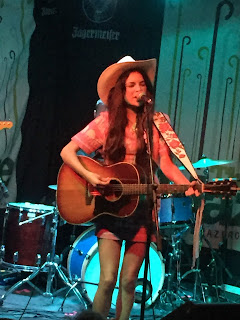 Maybe the hustle, bustle and clanking of glasses was missing, but you could quite easily have been in any roadhouse honky tonk in the Lone Star state such was the aura of Whitney Rose making her UK debut at The Maze in Nottingham. Clad in the multi-purpose hat, it didn’t take too long for Whitney and her cracking band to hit their stride. The result was a heart bending array of real deal country tunes raising the heat in a room that has seen more than its fair share of American music legends over the years. The only double take is to remember that Whitney is as Canadian as you come, albeit the Texas dust has rubbed in far more than skin deep.

In a gig week where the domineering big vocalist ruled the roost in one show, this was very much a team effort from Whitney’s band led by some scintillating lead guitar work from Will Meadows. If Whitney supplied the three chords and the heartache, Will was spot on with the twang, almost rendering the missing pedal steel surplus to requirement. Although slightly adrift from the spotlight, the rhythm team of Kyle Sullivan (drums) and Andrew Pacheco (bass) solidified a set list that criss-crossed spine tingling originals and routine classic covers.

The 2015 full length album HEARTBREAKER OF THE YEAR may have had the rich association, but it has been the current lower key EP SOUTH TEXAS SUITE which helped rise her profile in the UK leading to a handful of inaugural dates tagged onto a rather extensive European tour. Indeed a road hardened interior is masked by a petite exterior when truly assessing Whitney Rose. Over the course of the show, the hat was discarded as the vocal range was stretched; all within the confines of a soundtrack that rarely tipped off a lofty pinnacle.

Midway through the gig, Whitney paid tribute to fellow Austin song writing resident Brennan Leigh for gifting the wonderfully simplistic song ‘Analog’. In turn there is little hesitation in praising Whitney for the brilliantly penned ‘Three Minute Love Affair’, perfectly capturing the romantic notion of the Texas Two Step. Both tracks appear on the EP and were joined on the evening by the geographically inspired nostalgic piece ‘Lookin’ Back on Luckenbach’ and the lively main set closer ‘My Boots’. 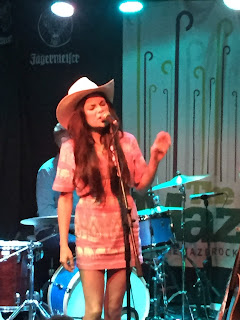 In true country tradition, the selected covers are more a celebration of genre roots rather than pure populist sentiment. ‘Tonight the Bottle Let Me Down’, ‘Stand By Me’ and ‘Two More Bottle of Wine’ are hardly a stab at left field country, but their execution was a perfect fit for the art being created. Earlier in the set, a cover of ‘Suspicious Minds’ did raise the eyebrow as Whitney ditched the guitar for the first of a couple of songs. If you’re seeking one non-original tune that crowned the evening, then the band’s instrumental version of the early sixties guitar piece ‘Sleep Walk’ shone a celebratory light on the worth of their total contribution to the event.

With a hint of what’s to come, a new song named ‘Arizona’ was impressively previewed; once more another tune rife with Will’s nifty guitar work. It was indicated that Nashville was the recording location for the next off the peg Whitney Rose release. Maybe this could be an assault on Music City; a place one fine Canadian light since Lindi Ortega’s decision to quit the chase on those streets. Wherever Whitney plies her trade, the musical environment will be enriched such is the wealth of her songs and the stylistic way in which she upholds the tradition of her beloved genre.

Local singer-songwriter Luke Whittemore provided the support for the evening with more than a little Stateside influence in the delivery of a fistful of fine songs. Luke is striving to establish himself on the UK scene and a slot at this year's Maverick Festival will present an opportunity for wider exposure of an artist with plenty to offer.

Those folks fortunate to catch the Whitney Rose Band on this short UK visit will have been served up a real treat. Spreading the word on her style may be an uphill battle on occasions, but when the music and atmosphere does its job, the best advert in the world is revealed for all to see.