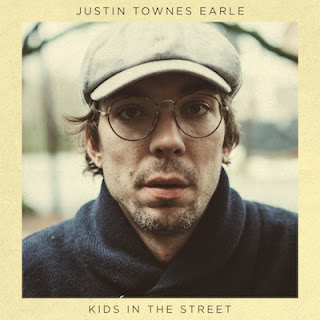 The music of Justin Townes Earle is possibly not wholly designed to spread its wings and find an audience. It’s always been the reversal with keen eared listeners getting drawn to a sound which is almost chameleon-like across the roots spectrum. Pinning down the style often proves a futile exercise, but the results of half a dozen albums over the last ten years has presented a pretty impressive output of how to utilise one’s gifts. KIDS IN THE STREET is the latest effort from an artist where striking out from a pre-determined destiny may have proved a challenge. One certainty however is that Justin Townes Earle has managed to do just that, with the new record moving the marker along nicely.

Listening to this record several times to compose some primary thoughts did generate a comfort zone impression. There is a serene relaxed feel to the dozen or so tracks with plenty of upbeat and positive vibes. To both contradict and back up this assertion, further delving revealed Justin extolling the circumstance of recording this album at a moment of exciting stability in his life while making significant changes in how he makes a record. Either way, what is more important is the fruits of this latest strand of Justin Townes Earle music and there is plenty of appeal to extract.

In line with his previous work, the sound does bounce around the genres with perhaps the two strongest elements being a general soulful direction permeated by insertions of traditional country. You can also throw is some good old folk storytelling in the guise of an updated version of ‘Same Old Stagolee’ and the pensive nostalgic title track ‘Kids in the Street’. The latter is one of several pieces to benefit from the dulcet tones of pedal steel, while an equal dose of organ works wonders in stirring the soulful pot across the record. These two aforementioned songs reveal the worth of the lyrical content with lines such as ‘back when life was simple like 1, 2, 3’ being all that is required to sum up losses accruing from gentrification. The title track stemmed from Earle’s Nashville upbringing and focusses on his view of current changes there. Elements of the city’s darker side inspired the updating of the other track from its folk tradition base.

For the making of this record, Justin and his team headed west out of Nashville intent on mixing up the sound. The soulful results of opener, and one of the promotional tracks, ‘Champagne Corolla’, alongside cultured rocker ‘Maybe a Moment’, organ beneficiary ’15-25’ and ‘Short Hair Woman’ all appear as testimonies to this transition. However two of the prime tracks are when the Nashville core is returned to in the lovely feeling generated by ‘What’s She Crying For’ and the traditional leaning ‘Faded Valentine’. The latter possesses the most glorious, simple and prominent opening part before settling into a gentle ear pleasing roller.

A bonus track on certain versions of this album (a first release on New West Records) features a distinctive take on the Paul Simon classic ‘Graceland’, but while proving a familiar listening point for folks new to his music it doesn’t really truly define where this album takes you. What KIDS IN THE STREET does do is continue to establish Justin Townes Earle as a genuine artist, highly capable of making fine music which will eventually find its way to its intended listening base. A short UK tour this summer will give the album a lift over here including a headline slot at the Maverick Festival.