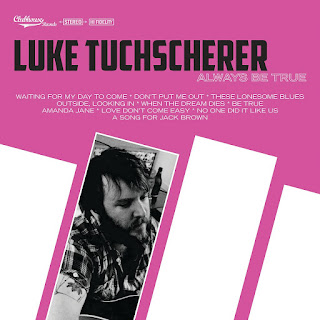 There can be two ways to grasp an album. One to take the feeling it evokes at face level or on the other hand get your thinking caps on and explore its deep crevices. If you take the wise option to acquaint yourself with the new Luke Tuchscherer album, both approaches will reap dividends. The surface content of ALWAYS BE TRUE rips through a soundtrack of balanced roots rock taking its influence from country, Americana and the sound of the suburbs for those of a certain age. However this highly palatable presence is only the start of mining the true worth of a singer-songwriter equally adept at firing up the ballads alongside outright rockers.

The background to Luke’s second solo release since his decision to predominately pursue a  route away from his band The Whybirds was a tie up with Clubhouse Records. Having a small prior understanding of both parties leads to a conclusion of this being a strong fit and its wider infrastructure should reap greater rewards. The crowdfunding process was in place to get the record initially financed and the finished product is gift wrapped to all those who have believed in Luke.

Being greeted by the sonic delights of the production melding in a melange of stringed instrumentation gets exploring this album underway in fine style with greater riches lying for those prepared to exert a little more thought. Structurally the album rolls out as the proverbial game of two halves in an intended bout of symmetrical planning. Surely with a nod to the vinyl listener, two distinctive blocks of five tracks unravel with cyclical tendencies. Tracks #1 and #6 act out the role of the upbeat opener, while #5 and #10 certainly have a concluding feel to them.

Delve deeper into the lyrical mind of Luke’s songs and further patterns emerge to furnish this album with greater appreciation. The first half takes a very philosophical stance stoked by an essence of realism. There is definite optimism to opener ‘Waiting for My Day to Come’, although slightly mooted with frustration. The virtual side one ends on a melancholic note with ‘When the Dream Dies’. The tempo of both these numbers also resembles the mood. Out of the three other songs sandwiched between the two aforementioned ones ‘Outside, Looking In’ is the pick based on its general feel and the impressive way that bitterness is conveyed via the lyrics. ‘Don’t Put Me Out’ and ‘These Lonesome Blues’ also show that not a single track has been wasted, either musically or lyrically.

The second half of this neatly planned ten track collection seems to focus on the micro especially with two of the numbers being name-explicit. The album title is extracted from a line in ‘Be True’ which in turn also acts as the conduit into this phase of the record. It is also an upbeat number in the same mold as the album opener and strengthens the overall feel of the music as we reach the midway point. ‘Amanda Jane’ is the first of the named tracks and a person clearly close to the writer’s heart – reality or in character. ‘A Song for Jack Brown’ rolls out as a tribute piece to a late friend and its acoustic feel successfully closes the album in a reflective and mournful mode. This is real life music, no holds barred. ‘’Love Don’t Come Easy’ and ‘No One Did it Like Us’ also take the writing down a direct personal route, while ensuring the entire quality sound of this record possesses a seamless appeal.

There is a strong element of balancing the dream with reality in the writing of Luke Tuchscherer or perhaps put it differently, a solid bond between the attainable and utopia. Meaningful songs expressing explicit desires adorn his work akin with a general feel that these tunes are equally at home in a live context where the rockers can rock and ballads can weep. ALWAYS BE TRUE frames an artist in control, earning every inch of their crust and repaying the faith presented to them. Ultimately Luke Tuchscherer makes damn good music and has been a pleasure to discover over the course of his two solo albums.