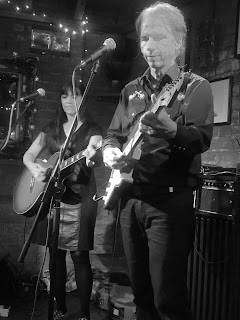 There’s a solid reliability that you are in for a fine good time when The Kennedys hit town. Pete and Maura have made the Kitchen Garden a regular stopping point when they hit European shores, being more than capable of luring a loyal following to their shows. To that extent, the duo from New York City decided to make this event an all request evening. However this was not some pre-meditated social media campaign, just Pete passing an A4 notepad round the room prior to the start then mulling over a raft of requested songs that more than filled a near two hour performance.

At the end of the encore, which consisted of their old favourite ‘Stand’ and a usual fab four cover on this occasion ‘A Day in the Life’, hazy memory totted up well over 20 numbers spanning the breadth of The Kennedys’ lengthy career as a performing duo. As usual all the tunes had The Kennedys twin trademark trait of Maura’s supreme folk vocals and Pete’s sublime guitar playing. In fact the ease of which a stroke of the Stratocaster turned it into a mystical musical wand was a joy to witness at barely a couple of feet away.

There was no real hot off the press release to expose on this tour as the pair still have considerable mileage left in their 2015 triple launch of a duo record plus a solo offering from both Pete and Maura. Tracks from all three were played this evening off a set list where folks could literally have no complaints. Although there was one solitary new song delivered with ‘Don’t Talk to Strangers’ coming across as a smashing piece upon first listen.

A great strength of The Kennedys is their ability to pen a stellar melody amidst a soundtrack that spans the American roots music spectrum with more than a heavy slant on heyday rock ‘n’ roll. It has certainly done no harm in having a long association with folk maestro Nanci Griffiths including backing band slots with her. Therefore there was no surprise in one of her songs appearing and ‘Love at the Five and Dime’ did the trick.

Reference to, and the utmost praise, has already been bestowed upon Pete’s playing with two particular standout moments being a light hearted version of the classic tune ‘Apache’ and the rocking pre-encore closer ‘Midnight Ghost’. While on the subject of Pete’s contribution, worthy mention needs to be given to a selection of New York inspired tunes taken from his solo album HEART OF GOTHAM. ‘The Bells Rang’, ‘Williamsburg Bridge’ and ‘The Riot in Bushwick’ were all superbly presented complete with a detailed background introduction.

Mauna’s solo album VILLANELLE also shared the spotlight, with ‘Fireflies’ and ‘She Worked Her Magic on Me’ flourishing in the limelight. We were also reminded that this collection of songs took the words of poet BD Love, added Maura’s impressive melodies and exceptional vocals before the finishing touch of Pete’s guitar rounded things off. Around the same time The Kennedys released their latest fully credited duo album WEST and top tracks such as the rock ‘n’ roll fuelled ‘Travel Day Blues’ and ‘Southern Jumbo’ entertained this well attended Kitchen Garden gig.

As it was gauged that Kennedys’ newbies in the audience were thin on the ground, we were spared the well-told story of their destiny meeting in Lubbock Texas many years ago. However the song spawned from that moment ‘Half a Million Miles’ was sung unannounced, but still shrouded in the love that blossomed in the ensuing years.

One guarantee is that this is not the last we will see of The Kennedys in Birmingham, whether it is another two year wait or a little sooner. When they do return it will be a highly prized evening of outstanding folk ‘n’ roll music. Maybe the set list will be fuelled by another request deluge or more likely, the next chapter of The Kennedys recording career.