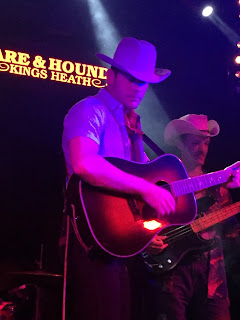 Sam Outlaw definitely feels at home touring the UK. It has been a little over eighteen months since he was introduced to British audiences as the opening act for Aaron Watson and things have gone from strength to strength since. This latest of several trips is on the back of a slot at the prestigious TØnder Festival in Denmark and a first return to Birmingham since a date at The Glee Club on that inaugural tour. The growth of Sam Outlaw is symbolised by the expansion from a duo format with Danny Garcia back in January last year to now a seven-piece full band line-up complete with assorted guitars, pedal steel and drums. This mode clearly suited the barrage of songs delivered from his two albums and a Hare and Hounds audience was treated to a comprehensive display of real country music.

2017 has been the year that Sam Outlaw has introduced Nashville-based singer-songwriter Michaela Anne to UK audiences, through a spot in the band on keys and a solo opening slot to showcase her own songs. Anticipation for seeing Michaela live grew after checking a couple of her albums out online and she proceeded not to disappoint during the thirty minutes afforded to her in this Birmingham gig. Her style is based on the classic traditional country music performer and if you’re seeking a contemporary comparison, Margo Price can be suggested. The strongest songs to come across from this opening slot were saved for the latter stages of the set with ‘Luisa’ and ‘Bright Lights & the Fame’. The latter probably took the overall crown and doubles up as the title track of her most recent album. While being grateful of the opportunity to share her music, Michaela did depart the stage with a hope to return one day with her own band in tow; there are a growing band of admirers to support her in this desire.

This was the second time seeing the Sam Outlaw Band in its full complement this summer. Previously, a festival show at SummerTyne had been shared with Jim Lauderdale, but the major upgrade from that evening was based on totally owning the performance. It also helped that the stage time was increased from sixty to ninety minutes, creating time for more audience interaction and the inclusion of select cover songs that have become a feature of the UK performances. 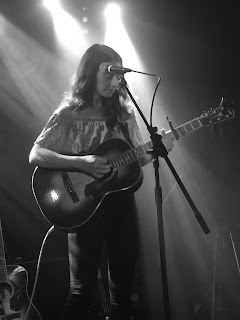 Such interaction is not short of irony, occasionally edgy and very wry. Underpinning the humour is a sincere respect of being appreciated as a song writing, recording and performing artist in a land far away from his LA home. Indeed, it is probably the song writing qualities that shine as his major asset and there was ample evidence on show this evening of stellar compositions from the two albums. It has been documented here before that ANGELENO carried more weight than the recently released TENDERHEART, although the longevity of the former may be the overriding factor.

From the new album, ‘All My Life’ still retains the number one tag and the superb live rendition in Birmingham further cemented this view. No introduction was needed this time (unlike SummerTyne!) and it formed a central part of the evening’s finale when the band really hit their stride. Leading this more intense part of the show was the song ‘Sacramento’, a revised version of Michaela Anne’s ‘Luisa’ and delivered in a souped-up honky tonk rock ‘n’ roll style.

One other upgrade on the SummerTyne show was that the sound in the Hare and Hounds was spot on, with pedal steel and lead guitar being peerlessly clear to an audience in close up vicinity. The vocals also did justice to the quality of the songs with Molly Jenson joining Sam on several occasions, more prominently on the acoustic trio including ‘Country Love Song’, and most definitely on her lead rendition of the Dwight Yoakam classic ‘Honky Tonk Man’. This was the opening song of a three-track encore, which also included a version of George Strait’s ‘One Night at a Time’, and gig closer ‘Hole Down in My Heart’, introduced as the ‘hit’ that radio didn’t play.

Popular songs flowed all evening including the requested ‘Trouble’, with the additional time allowing certain song introductions such as the marital booster ‘Keep it Interesting’ and the lessons of a doomed love ‘She’s Playing Hard To Get (Rid of)’. Probably proving one of the evening’s highlights, ‘Angeleno’ was delivered with an appreciative nod to Ry Cooder.

As the dust settled on this latest successful Sam Outlaw gig, news has surfaced of another return to these shores in the autumn. There is definitely a growing appetite for his style of country music in the UK and who can argue with the high quality that was on display during this Birmingham show.