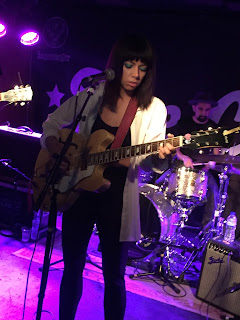 Are we in a golden age of American protest music? Although far from year dot, November 2016 re-invigorated the re-set button and will surely be the catalyst for an eventual deluge of material to remove any doubt from the opening statement. This assertion grows rapidly with each touring American artist taking a European stage, an effect that is light years away from Shepherd’s Bush London 2003. Prior to recent events, including a significant one just two days previous to this show, Hurray for the Riff Raff had constructed their own ‘ode to resistance’, based on the many injustices afflicting minorities, particularly the plight of the Puerto Rican in America. This powerful album strategically titled THE NAVIGATOR is once again the centrepiece of an overseas trip for the band, this time mainly focussed on Scandinavia and a prestigious spot at the Green Man Festival in Wales.

British fans are being spoiled this year, with a vague count of this visit being number three of four planned in 2017. Only a couple of small shows have been scheduled within the shadow of the festival, but one of these was at The Cookie in Leicester. This was the band’s first visit to the English Midlands since last summer and one now with the new album completely bedded in. If any doubts lingered about the record being one of the hottest and most powerful releases of the year, then spending just over an hour in the company of Alynda Segarra and her four band members unequivocally removed them.

Empowered by her music and forever feisty, Alynda is a totally absorbing character on stage. Pouring everything into each song is a given, especially those when she ditches the guitar and throws enigmatic vocally inspired body movements into the mix. The first of these was three songs into the set when the performance was ignited by an exhilarated version of ‘Hungry Ghost’ from the new album. Almost an hour later, the main body of the set was concluded with the passionate anthem ‘Pa'lante’. The appetite for a live experience of listening to this song was whetted by the band’s South by South West performance being expertly recorded for digital share. However, this did not come close to the shivers generated from the alternative existence of standing literally two paces from it being belted out. 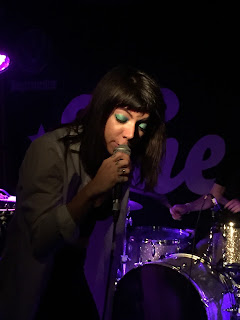 You should be getting the drift that this was a somewhat intimate gig in a venue doing its best to replicate a New Orleans summers day, in the midst of a typically British one. The cramped confines of this city centre cellar venue, plus the stage at the same level as the standing audience can go one of two ways. Engineering a good position was useful especially if your design was to get the most out of this show. With that intact, the band played their part via a scintillating performance right from the opening bars of ‘Life to Save’ to a rousing finale rendition of ‘Dancing in the Dark’ to send folks home singing and happy.

Alynda greeted the concluding number with an assertion of this being the only Boss she pays attention to. The other spoken contributions reflected the serious and impassioned approach that she takes to using her music as a voice for resistance. Opening the spoken part of the show with ‘we are Hurray for the Riff Raff, we are Americans and we come in peace’ sets the tone for a band that quite simply play modern day folk songs in a rock ‘n’ roll style.

As previously indicated, THE NAVIGATOR supplied the bulk of the song material. ‘Living in the City’ and ‘Rican Beach’ reciprocated their prominent album positions with similarly live epics, while ’Fourteen Floors’ was elevated (excuse the pun) by Alynda switching to the keys to deliver this song in a stripped back format. Outside the new album, ‘Lake of Fire’, ‘The Body Electric’ and ‘Good Time Blues’ featured, although specified tracks on the printed set list ‘Blue Ridge Mountain’ and ‘St. Roch Blues’ were either replaced or omitted. The latter was planned to join the Springsteen cover in the encore, but for some reason this part of the show was frustratingly curtailed.

However, this was just a mere mark on a performance that bristled with emotion, musical chemistry, and a lead protagonist emerging as a spokesperson for resistance through song. Hurray for the Riff Raff is riding a wave of sincere artistic credibility and taking an ever expanding band of admirers with them. The quirky environment of The Cookie in Leicester probably made more of an imprint on the audience than affecting what Hurray for the Riff Raff do on stage. Essentially, Alynda Segarra gave an absolute dominant performance and the musical world of many folks was enriched.