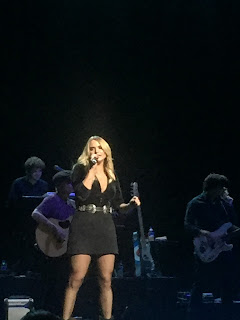 Six albums and twelve years into a commercial recording career may yet prove to be just the starter for Miranda Lambert. As the Texas dust settled on her ‘full’ UK stage debut, thoughts turned to how exciting the next decade, and the subsequent ones after that, can be for an artist at the pulse of contemporary country music. Of course, this is dependent on evolution and maximising the enormous potential of development at her fingertips. These range from establishing herself on an international platform to forming a body of work that adds a legacy impact to one of commercial success. She is in the midst of the first part of this and a Birmingham audience had an early opportunity to revel in very much the present of this next significant phase of her career.

Elements of this development are making smart moves, not always dictated by the bottom dollar. For instance, there was scepticism about staging her first UK main show in such a large venue. A re-configured Barclaycard Arena just about succeeded in providing a suitable setting, but from a personal perspective how much elevation could have been secured from staging it at the city’s Symphony Hall, Institute or Academy. The eventual turnout may likely to have been squeezed, but the pay off in raising the roof would have prevailed. First and foremost, Miranda Lambert is not a UK arena act in 2017. However, size of venue is not the only measure of an artist’s stature within an industry. 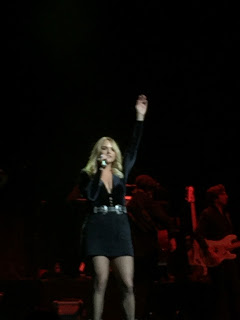 Perhaps the greatest compliment to pay Miranda Lambert is that the set list that accompanied her on this European excursion is merely the icing on a substantial back catalogue. Once again, from a personal perspective, there are at least a dozen of her recorded songs that are preferred to what was offered on stage. Prior research advised of this situation, but from a general viewpoint, it is hard to dispute the popular appeal of the songs chosen. Indeed one of the aims of this concert was to see which of the set list stood out to prove the eventual highlights.

For me there were four specific songs that created a lasting memory of their live airing. First up was ‘Ugly Lights’ off the new WEIGHT OF THESE WINGS album and one of the few tracks to get a brief introduction. The concept of this record with all its break up connotations was brought to stark life in the next three minutes of tearing away the layers of a heart. Earlier in the set, ‘All Kinds of Kinds’ had brought the arena to frenzied activity with its heartfelt sentiment and enjoyable interaction. This song has taken on a new lease of life since listening to its writer Don Henry play it at The Bluebird Café in Nashville last year. The other two songs to really stand out came in just ahead of the fiery finale of ‘White Liar’ and ‘Gunpowder and Lead’. ‘Little Red Wagon’ preceded these and its live version was a substantial upgrade on an album track that struggles to make an impact among the heavyweight offerings on PLATINUM. Also from that record and starring during this show was ‘Automatic’, which probably saw Miranda reach her optimum peak on the evening as she strolled around the stage belting out this nostalgia-fuelled classic. 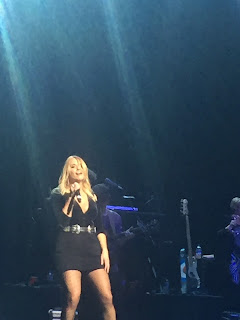 Elsewhere the usual suspects went down a storm. ‘The House That Built Me’ and ‘Tin Man’, the latter beginning a two-song encore segment, brought a tear to many an eye, while ‘Mama’s Broken Heart’ probably maximised the audience reaction. ‘Pink Sunglasses’ emerges as a light hearted crowd  pleaser, disguising its more serious message. While professing not to being everyone’s cup of tea, the fun element ensures its tenure at least for the moment.

Away from the recorded content, Miranda and her strong eight-piece band celebrated the work of other artists on two occasions. By far the best of these was a rollicking version of Rodney Crowell’s ‘I Ain’t Living Long Like This’. This saw the band significantly raise their game and left a pondering thought that maybe an area for development could be bringing them more to the fore in future shows. There also could have been room for raising the profile of the keys and pedal steel, thus giving the constant guitar breaks a relief. In essence, there was a general feel to widen the scope of the country sound. The other cover posed as the end point with Miranda celebrating a recent enlightenment to the power of music courtesy of U2. ‘I Still Haven’t Found What I’m Looking For’ was the chosen piece led by Miranda handily joined at this stage by her supporting cast, both on and off the stage. 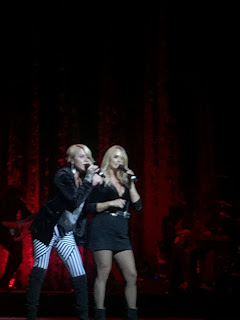 Part of Miranda’s on-stage team is independent recording vocalist Gwen Sebastian who was afforded a brief moment in the spotlight to share her new song ‘Cadillac’ with the audience. This came over as a strong piece sung with great panache and also revealed Miranda’s increasing prowess as a songwriter. Earlier in the evening had seen English duo Ward Thomas open the show and given the chance by their new label Sony to prosper on a bigger stage.

The magnitude of this big night for Miranda was not lost as she set about a first lone show, following last year’s C2C appearance, on the soil of a country that continues to give her serious love. She did admit to apprehensive nerves, but these failed to hinder any of the twenty-one songs served up. One aspect that she needs to grasp is the reserved nature of UK audiences. She is not the first and will not be the last to comment, but it is a prominent reality of the difference an entire ocean can make. However, she will be held to her promise to return.

Returning to the wider aspect of Miranda’s career and where next could it head. The first decade has yielded enormous success, give or take the odd bump, and this has been done with a loosening of the reins as a signed artist. Further development in this area will help fuel the legacy. She definitely seeks influence in the right areas and maybe this could lead to collaborations, extended duets, more solo writing adventures, legendary tributes or specific switches across the genre platforms. As a commercial performer, she has built up a considerable fan base and the test of  a true artist is to take them with you rather than being dictated by them.

At this moment, let’s just rejoice in the present and be grateful that Miranda Lambert has gravitated to an international platform. She remains my number one contemporary recording artist and it was a privilege to be in her presence (with a few thousand others) for a thankful, fabulous hour and a half. Hopefully in the future she can rise to number one in the live charts, with her Birmingham debut being a very high new entry. The thought of six albums being the mere aperitif is an exciting one and maybe the overseas tour of 2017 will be a pivotal moment.