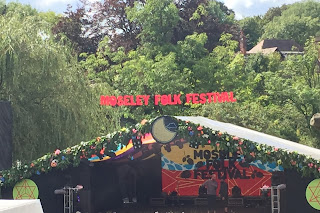 Is Moseley Folk Festival about the headliners across the weekend; the equally important artists plotting their road to stardom via the Kitchen Garden stage or the attendees content to just sit back and soak up the vibes of an event hailing the change of the seasons? The last point was especially pertinent when comparing the bright sunshine greeting John Moreland’s slant on bringing some Oklahoma dust to the English Midlands to the eventual rain showers aptly accompanying Kate Rusby’s warm Yorkshire view of the world on a cool Sunday evening.

Although the scheduling does allow the utmost dedicated festival music fan to absorb themselves into close on forty acts across the twin main and Lunar stages, reality requires brief periods of easing off. Of course when to vacate that close up stage proximity can add to the conjecture and lead to just offering casual observations on artists like Jose Gonzalez wooing an enthusiastic main stage gathering on Saturday. Similarly, positive reports of Roddy Woomble doing likewise the following day surfaced, but there are times for a cup of tea and the lure of the mightily impressive Emily Mae Winters playing a super set on the aforementioned Kitchen Garden stage tucked away in a corner of Moseley Park.

On the other hand, close up and personal was the only place to witness the Americana quartet, which raised the bar of the transatlantic serving dished up by the organisers this year. Courtney Marie Andrews has burst onto the UK scene this year with the release of her latest album HONEST LIFE and this second visit to our shores has ratcheted up the momentum. Looking every inch the consummate performer, Courtney and her band transfixed main stage watchers late on Friday afternoon with a gorgeous bunch of highly crafted songs delivered with such class and a mesmerising gaze to suit. Fast forward twenty-four hours and the same location hosted a frenetic hour of Shovels & Rope. The energy, buzz and interaction between Cary Ann Hearst and Michael Trent were intoxicating. In a sign of humility towards their hosts, Cary apologised for the pronunciation of ‘Birmingham’ ahead of launching into one of their top songs, while stating the need for its rhyming role. Courtney was just happy to be in "Brum" Rehearsing the local lingo paid off.

As indicated earlier, John Moreland brought his own distinctive style of roots music in a format best described as focussed, solitary and an absolute belief in the power of the song. The Americana quartet was completed with a full band Saturday lunchtime set from Scott Hirsch on the main stage. In these times where the term ‘Americana’ twists across the musical plateau like a manoeuvring rattle snake, the guitar-drums-keys of this outfit was as core to the term as you are likely to find. Throw in a Californian vibe combined with the welcome sunshine, and the sound made Moseley Park feel like a small part of the Golden State for forty-five minutes.

Before we head back to the core of Moseley Folk and the songs of our home isles, a quick mention for Kaia Kater and a brief glimpse into the roots world of this Canadian banjo player. Noon hadn’t yet struck when she took to the stage, but soon had the early gatherers hooked with her style of folk music, even to the extent of inducing a little dancing. For those interested Kaia returns to Birmingham later in the year to open for Rhiannon Giddens in the Town Hall show; this is an event not to be missed.

Undoubtedly, for many the highlight of the festival would have been securing the services of Fairport Convention to effectively headline on Saturday evening. This legendary outfit, quite rightly labelled as the pioneers of folk rock, are in the throes of celebrating their fiftieth anniversary with founder member Simon Nicol still at the core alongside Dave Pegg who joined soon after their beginning. A comprehensive set covering a raft of traditional, trademark and cover songs was delivered as the curfew was taken to its limit. The genuineness, affable demeanour and accessibility of the performance reached out beyond the Fairport base, with all present being reassured that time has yet to be called on the longevity of their performing status.

Amy Macdonald and Laura Marling were the respective Friday and Sunday night headliners. Comparisons are aplenty on a literal level including a rapid rise to the top barely before reaching the ripe old age of twenty. Both brought plenty of fans to the festival, no doubt hooked into their contrasting performing styles. Amy decided to break away from her full band sound that has formed her pop-rock tonality for this event, bravely stripping all the electrification out and letting her popular songs feed an expected audience. Laura maintained the convention that surrounded her touring year in support of the excellent album SEMPER FEMINA, even to the extent of keeping the set list in tact including a spinetingling rendition of the Townes Van Zandt composition ‘For the Sake of the Song’. This format is a fuller sound than some of her previous acoustic outings and generally in line with the tones of her latest two records.

In a brief foray into the world of objectivity, Laura won this ‘contest’ hands down with a super cool aura protruding a series of incredibly deep songs to an audience blissfully silent (in front of the stage anyhow). This was announced as her final gig of the year and it didn’t disappoint, almost to the degree of eclipsing her Institute show in the city back in March. Maybe there was a slight downer on cutting the set short, fifteen minutes ahead of curfew, but the coronation had taken place at the end of the final song ‘Rambling Man’.

We now are entering the territory where folks may be screaming ‘what about this highlight or that band’. So to tackle just a few, let’s start with The Magic Numbers rolling back the years with a main stage set on Friday evening. This double brother-sister combo cranked up the volume considerably, probably rocking out most over the weekend, capably led by Romeo Stodart on lead guitar and impressively supported by Michele on bass. The set was a mixture of singalong crowd favourites at the beginning and end, sandwiching a batch of new songs signalling an attempt to re-capture the heady days. To an outsider, they brought vitality to the festival and variation to add to the eclectic nature.

The pick of the English folk acts for me was the outstanding performance of Josienne Clark and Ben Walker on the main stage late on Saturday afternoon. Ben’s caressing of the guitar is a joy to savour, while the way Josienne wraps herself wholly around each song is utterly fascinating. The humour and irony is projected out there for folks to judge, but essentially the most beautiful of music speaks for itself. Other traditional acts enjoyed included The Furrow Collective with their stellar line-up of Emily Portman. Rachel Newton, Lucy Farrrell and the ever-busy Alasdair Roberts, plus the fervent Irish folk of Lankum, fully in the throes of casting off the Lynched label. Michael Chapman brought his wealth of experience to the main stage on Saturday afternoon proving that age is no barrier for one man and his guitar to hold a festival audience in the palm of their hands for forty-five minutes.

The festival’s Lunar stage is often the source of the eclectic offering and this was exemplified by the toe tapping rhythmic tones of Nifeco Costa & Babcock Jazz, just as the threatening rain kept its distance on Sunday afternoon. Later in the evening, Birmingham’s own crazy band The Destroyers thrilled newbies and regular festival goers alike with a raucous set splitting the more cultured acts of Kate Rusby and Laura Marling. The Trembling Bells proved regular visitors to this stage, playing to their loyal Birmingham followers twice, including a set with Mike Heron of Incredible String Band fame.

While a host of different performers drifted across this stage during the weekend, three solo artists with very early slots did their reputation a power of good with impressive sets. Jess Morgan is an increasingly well-known acoustic singer-songwriter and she did her growing profile no harm with an assured bunch of Sunday morning songs. Izzie Derry is a lot less experienced than the well-travelled Jess, but raised her profile significantly during the Saturday morning billing. Fenne Lily was the odd one out of this trio by virtue of her chosen tool being wholly plugged in and fully electric, though extracting a softly lo-fi sound. A few teething problems at the end failed to take the shine off a performance that succeeded in creating some lovely ambience.

Just a final few quick words for Standing Waves who were that band enjoyed amongst the hay throwing and all the artists playing the Kitchen Garden stage. Sadly, only Ashland on Friday and Emily Mae Winters likewise on Sunday drew me away from the main two stages, but this is no slight on the artists who make this an essential festival feature, alongside the bar!

So apologies for not mentioning your favourite act of the weekend, or not eulogising enough about them. There is also no guilt in stating that the three pre-festival transatlantic favourites lived up to expectation with Scott Hirsch joining them. On Friday night, Courtney Marie Andrews was the star. By Saturday, Shovels & Rope had pushed her to the limit. However, the final word lies closer to home. Laura Marling, you were magnificent and the perfect send off until Moseley Folk Festival resumes its position as the city’s leading outdoor music attraction twelve months from now.

www.moseleyfolk.co.uk
Posted by David at 16:45