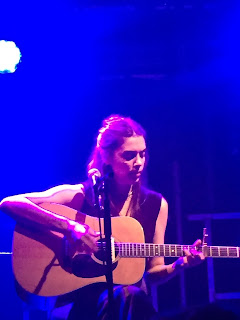 There has been a tendency on several previous visits to the Edinburgh Fringe to avoid the straightforward gig and enjoy music performed in a more theatrical manner. However, temptation prevailed when a scheduling slot appeared on the Wednesday of this year’s visit with an opportunity opening up to catch Julie Byrne in concert. Although this was a billed Fringe show, the format rolled out to be a conventional gig with the usual support act and accompanying break. One predicted assurance was that the headliner would confirm the growing credentials of a respected international American touring artist and re-affirm the buzz that has accompanied them all year.

Summerhall is one of the Fringe’s many bustling venues; housing a diverse range of artistic offerings. This gig was held in the Dissection Room and thus provided the subject content for an instant settling comment from Julie as she took to the stage around a quarter past nine. Over the next hour, a totally absorbed seated crowd, edging towards three figures in numbers, were treated to a delightful performance of lo-fi folk. The requisite for silence is an integral part of such a show being pulled off and this Edinburgh gathering was happy to oblige. Julie opened and closed her set in solo mode, just exquisite slender guitar playing and the smoothest of voices. For the main body of the performance, Julie was joined by her touring companion Taryn Miller on some kind of lap keys, resulting in a melding sound to adorn the near seamless set of tranquil songs.

This was not really an evening learning about Julie Byrne - the person. Chat was kept to a minimum, creating a space for the audience to surrender their minds to the beauty of her soft vocals and gentle acoustic playing. The songs do tend to merge into one another in a live setting with little introduction, although the standout piece came mid-set in the guise of ‘Natural Blue’. This hails from Julie’s latest acclaimed album NOT EVEN HAPPINESS, a record that also housed the set opener ‘Sleepwalker’.

What we did deduce from the occasional dropped line was a preference to this intimate show in contrast to playing to a much larger audience at the recent Green Man Festival. At this moment, wry smiles were no doubt prevalent in light of choosing to attend. By the time the gig reached its conclusion with ‘Marmalade’, lifted off her previous album ROOMS WITH WALLS AND WINDOWS, the die of a Julie Byrne show had been cast; a mellowed audience bestowed with a gentle ear massage.

Earlier in the evening, an evocative tone had been set with Duncan Marquiss adopting an introverted stance with his experimental guitar approach and assorted pedal loops. This music demands absolute attention to grasp its intended mood and can often lead an unaccustomed audience to a mixed state of reception. From a personal perspective, it probably only started working towards the end of an approximately thirty-minutes set, but this type of music is so heavily personalised and essentially the antithesis of the shared experience.

There can be a slight one-dimensional aspect to the music of Julie Byrne, but when you tune into its mesmeric groove, the rays of satisfaction take limitless hold. Reviews of the latest album associate its sparseness with a bleak landscape, but there was alternate instant warmth from intense listening in a live unfiltered environment. While live music will never be core to my annual Fringe trip, this gig proved a welcome exception and offered full confirmation that the associated buzz around Julie Byrne is fully justified.