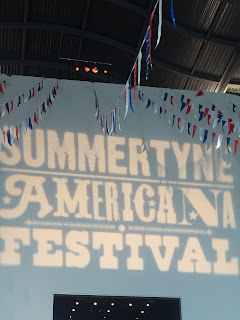 Is it a festival or a collection of gigs? No doubt, a strange question for many SummerTyne Americana devotees, but one pondered several times across the weekend of a first visit to this jewel of the North East. There are similarities with the likeminded Southern Fried Festival in Perth, but there is more of a compartmentalised feel to SummerTyne. While the outdoor Jumping Hot Club stage and the indoor concourse stage in the Sage’s ground floor foyer are integral parts of the event, the lifeblood and true pull are the array of independent ticketed events that are liberally strewn across the transformed venue.

An early decision to maximise the paid offering via purchasing tickets for six shows meant that there was always going to be a chance of the other two performing areas becoming a peripheral attraction. This proved the case after an initial sampling of the SummerTyne experience, with essentially the outdoor location being at the mercy of the weather and the concourse sonically hampered by its temporary transfer into a venue. Yet there were still plenty of golden moments to enjoy, if perhaps not to the intensity of the gigs.

With the Gateshead weather set fair for the Friday afternoon, the Jumping Hot Club stage proved a popular place for both locals and those travelling from further afield to sample music with a distinct North East roots. The remit of the Sage for this opening segment of the festival is plain to see and highly commendable. The staging of SummerTyne surely has to fight its corner with the wider local arts scene and embracing the locality is an essential selling point. Most of the local acts on Friday afternoon had a least part of their sets seen, although you had to arrive early to get one of the intense watching seats. Alternatively, the amphitheatre setting of this location via the grassy terracing made viewing accessible. The pick of the local artists was a band called Buffalo Skinners, but all slated acts played a key role in getting the show under way.

As the weekend proceeded, the outdoor stage has to compete with the concourse stage for the afternoon’s free entertainment. Obviously, the weather can be an important factor with options on the table as we were to find out on Sunday. However, with tickets to see the Angaleena Presley show on Saturday afternoon only a couple of artists were seen outside. These included Fargo Railroad Company, following up their Maverick Festival set with a hearty mash of Southern Rock, and the impressive Amythyst Kiah putting an old time roots spin on her Appalachian inspired music.

While general viewing of bands on the outdoor stage was fairly limited, there was another opportunity to see Robert Vincent play a full band set on Sunday and further solidify the progress being made. An increasingly similar variety of excellent songs was played from his two albums, just prior to the inclement weather setting in. With little sign of it abating, a couple of brief sorties outside after the afternoon paid show provided a short but wet sample of High Plains Jamboree and the Savoy Family Cajun  Band. Fair play to the hearty souls who braved the rain to embrace both bands in the entirety, but generally the pull of drier entertainment prevailed.

For the whole of Saturday and Sunday afternoons, the concourse stage was commissioned by the AMA UK to give an opportunity for some of its member artists to play a festival show. The audience was a mix of seated and standing folks watching intensely and a sizeable chunk passing through. As previously indicated, the band sound did struggle with the environment, but all witnessed artists embraced the opportunity. The pick of these was definitely Massy Ferguson, who probably had the biggest sound of the artists scheduled, but stuck to the task of showing why they are such a highly rated band. A bonus from the performance was UK artist Danni Nicholls joining the band on stage to sing the Zoe Muth part on ‘The Hard Way’. Not a bad substitute!

Two events that went down really well on the concourse stage were at the bookends of the festival. Just before the ticketed shows began on Friday, young multi-piece soul combo Stax Academy Revue wowed early Sage arrivals with a stellar take on the endless supply of classics that flowed out of a small Memphis studio in the sixties. This act also had a supreme support slot for Stax legend William Bell on the following evening in the Sage main hall and won over many fans during their weekend stay in Gateshead. Likewise, High Plains Jamboree had a successful SummerTyne and was granted a late Sunday night slot on the concourse stage, which gave folks an alternative to the ticketed events. The bonus was being able to catch the last half hour after the Chuck Prophet show finished and this traditional country outfit, led by Brennen Leigh and Noel McKay, duly rounded off the weekend in fine style.

For the record, and recorded in greater detail elsewhere, the six ticketed shows seen began on Friday evening with Merle Haggard's Strangers and Ashley Campbell just edging out The Shires. Marlon Williams played the only late night paid show of the weekend and this was not to be missed. The two afternoon show pairings of Angaleena Presley and Danni Nicholls on Saturday plus Jo Harman and LisaMills on Sunday both beat off the competition from further free stuff. Where tempting choices were available, Jim Lauderdale and Sam Outlaw won over William Bell on genre preference, while the power of Chuck Prophet was never going to be really challenged by the grace of Beth Nielsen Chapman as the festival closer.

However, there was one impromptu event that proved the pick of the free presentation. It was hastily announced and posted around the Sage that on Saturday evening Jim Lauderdale would host a songwriters in the round show in Hall 2 after his show. Therefore, plenty of dedicated diehards queued up to see Jim joined by Chuck Prophet, Ashley Campbell and Amyhtyst Kiah each perform a quartet of acoustic songs that took us well into Sunday morning. Following a general theme of relationships, each songwriter took the topic in a different direction especially Amythyst with some deep rooted offerings and Chuck, as you would expect, heading deep into left field. 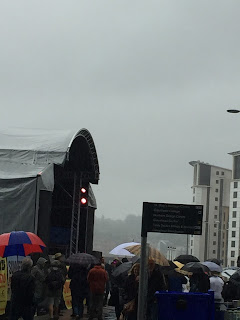 As the dust settled on a successful first trip to SummerTyne, thoughts turned to maybe another visit in the future. The festival appears fairly established with its ten plus years existence, but no doubt will always have to fight its corner from a funding point of view, especially with little sign of heavy corporate backing. It doesn’t take too much digging to understand what the event means to the dedicated Americana community of the North East and from a distance, it is essential that it be preserved.

Just returning to the opening question, and perhaps a personal emphasis on the six gigs did make this festival a little different. Maybe like the term ‘Americana’, a festival can take whatever form you want it to be. The proof is in the enjoyment of the event and SummerTyne delivered wholeheartedly on that front.
Posted by David at 20:59