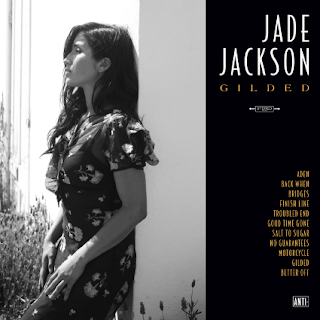 This debut album by Jade Jackson nearly passed me by, but thankfully, fate delivered an absolute beauty. GILDED in its title suggests either something golden or something hidden. One certainty though is that a little mining will reveal vast treasures. The sound hits you with a blast of indie tilted in an Americana direction while splashed with country sentiment. Ultimately, it’s raw, riveting and rather good.

The eleven tracks, all in a self-penned status, unwrap with a sweet and sour effect. The lyrics have a youthful zest to them, in contrast to some some worn vocals belying such a young performer. It transpires that intense listening to the Lucinda Williams classic album Car Wheels on a Gravel Road was part of the preparation journey from prolific introspective writer to a recording artist offering songs to the world. This has clearly rubbed off and while it would be remiss to compare, the detected influence gives the record a degree of maturity.

A useful element to any successful album is to have a crackerjack of a lead off track. ‘Aden’ does that precisely for the California-based Jade, with its cracking chorus segment and series of lovely melody shifts. A stellar opening line, “I grew up my father's daughter/ He said, "Don't take no shit from no one”, also sets the tone before a neat mix of rousing guitar and fiddle make this song a major pull. If this track gives the album an indie feel, it is also joined by the rocking closer ‘Better Off’, an interesting narrative piece titled ‘Good Time Gone’ and a key stand out candidate in ‘Troubled End’. The latter evokes a spirit of Johnny Cash meeting The Smiths with heaps of deep majestic guitar breaking out into scintillating solos.

Fleeting fiddle and briefly utilised steel provide the country tone with the heavily promoted track ‘Finish Line’ being the highest profile nod in this direction. ‘No Guarantees’ features later in the album in the break up slot, but comes across more as a rock ballad. This is similar to ‘Bridges’, which sees Jade’s vocals slip into tenderer folk mode.

A couple of pedestrian tracks do struggle to make a strong impact especially the slightly languid ‘Salt to Sugar’ and the title song ‘Gilded’ where the writing gets a little abstract. Okay, the latter’s indication of unlatching the cage of life does have some relevance to a debut album, but the writing has a greater effect elsewhere. ‘Motorcycle’ leads the pack on this score with its explicit message “my motorcycle only seats one” and a glorious piece of baseball analogy in the final verse. This is the second impressive referral to America’s pastime this year following Caroline Spence’s ‘Softball’.

However, the line of the record belongs to the second track ‘Back When’ with Jade proclaiming “I want to be the bird on the wire/ So many things I forgot to admire”. This excellent song has a fine acoustic intro before the electric kicks in and who can resist a song, which factors in listening to Hank Williams.

GILDED is a classy, cultured and cool album, which has clearly weaved in the influences of Jade Jackson really well. While perhaps this album is not designed for the purists, if cross genre pollenating is an inevitable road of evolution this is the ideal formula to adopt. The fact this album refused to budge from the review pile is a testimony to its slow burning appeal. This is a touch ironic in light of the super strong opening track, yet eventually getting to the grips with the entity of the album has been a worthwhile venture.