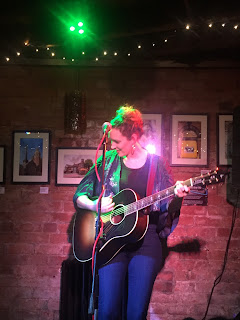 Hannah Aldridge noticeably thrives in the format of touring solo. It presents opportunities to bare the soul of her song writing and express the deepest sincerity she feels within her music. Key signs of progress as a touring artist are also emerging all the time, no more apparent than the evolution of the gigs hosted by the Kitchen Garden in Birmingham. Over the last three summers, Hannah has cultivated an ever-increasing turnout culminating in the latest show edging very closely into sold out territory. To mark this event, probably the most revealing performance to date was given as the new record was signed, sealed and delivered – both in a literal and metaphorical sense.

Hannah’s association with the Midlands area pre-dates the first Birmingham show by a few months, and at least half a dozen folks present for the initial gig at Bromsgrove’s Hop Pole pub in March 2015 were once again in attendance. Indeed tracing back to that first gig, we were introduced to songs such as ‘Burning Down Birmingham’, ‘Lace’ and ‘Gold Rush’, that had to wait a little while before ascending into recording status. That has happened literally in the last month and the centrepiece for this show was to strip down almost the entirety of the new album GOLD RUSH. This led to the sharing of its bare bones, fruitful sources of influence and subsequent birth.

As far as singer-songwriter shows go, this one was fairly intense, highly articulate and forever revealing. By the high standard of many such performers who regularly cross the pond, this is lavish praise. Only on a couple of instances did Hannah launch straight into a song, namely ‘Razor Wire’ and ‘Aftermath’, which opened each set either side of a short break. It was also the case for ‘You Ain’t Worth the Fight’ where Hannah is probably right to state that it needs no introduction.

The real beauty of live music is that it cannot be replicated in other mediums, with perhaps the written reflection or short video clip being just a tantalising teaser to re-visit or grow the experience. The wealth of informed song writing chat was an integral part of the evening, alongside showcasing a raft of highly crafted songs that are entwined within the existence of their creator on many levels. These range from the personal to the professional as well as frequently reflecting the observational and incidental.

Hannah’s general Southern upbringing, and more specific musical one, will always play a strong role in this chosen way to earn a living, although it could be construed that it chose her. Outside her own song-writing repertoire, which is extensive and entirely the domain of the recorded material, Hannah carefully selected three covers to spice up the show. Jackson Browne’s ‘These Days’ and a version of her father’s penned number 1 country hit ‘Modern Day Bonnie and Clyde’ have become staples of the live show, although celebrating the work of The Allman Brothers through a cover of ‘Whipping Post’ was a new addition. 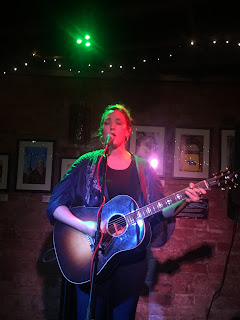 Maybe an outsider would categorise Hannah as part of the country fraternity, but this forms only an element of the DNA, possibly overstated through her Southern disposition. ‘Lie Like You Love Me’ remains her starkest effort at ‘three chords and the truth’, but it is when Hannah gets deeply personal (‘Black and White’), highly observational (‘Gold Rush’) and passionately emotive (‘Parchman’) that the songs freeze a moment in time. ‘Lace’ takes the audience into an alternate enticing world, while ‘Howling Bones’ is the finale invitation to return to a Hannah Aldridge show in the future, delivered in an unplugged format to shake off that last slither of song writing cover.

Just as thoughts were turning to when the alternative sound of GOLD RUSH would be revealed to live audiences in the UK, we were informed that plans are in the pipeline for a full band format to tour in the not too distant future. Maybe the increasing number of fans well versed in Hannah’s seemingly de facto mode of solo delivery are ready for the next step. However, this should not deter her from growing the raw and emotively charged way of exposing the songs that was witnessed this evening. Is it greedy to demand both though?

On a highly successful evening for many Kitchen Garden regulars, homegrown singer-songwriter Will Hunt shared a selection of his original tunes in the opening slot. Will was joined by his father Bill on accordion who had a distinguished career as a past member of iconic Birmingham bands ELO and Wizard. The feel of the songs was very different to what we were going to hear from the main act, but it was music that had a place and was executed well.

While this also applies to Hannah Aldridge, it was only the start to what was experienced during this latest visit to Birmingham. Maybe the welcome in the West Midlands is a little different to that of the main city in her home state of Alabama, but open displays of mutual appreciation were evident throughout. Exceptional songs, perceptive insight, a cutting aura and an open heart, all go a long way to defining the music of Hannah Aldridge. They also contribute to nights like this when any video clip, posted picture or published review is a mere chink of light on a very bright picture.