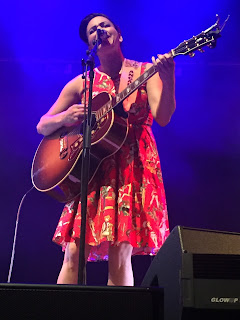 Sometimes you just have to wait patiently for that moment when an artist puts all their attributes on the table and the full potential explodes. This show was scheduled for the Saturday afternoon of Gateshead’s very own Summertyne Americana festival and the occasion which proved third time time lucky seeing Angaleena Presley really flourish. While a debut solo performance in another city a couple of years ago revealed an artist feeling her way and a subsequent support slot that didn’t really play to the appropriate gallery, this show was absolutely right on the mark. No band was required, just an exceptional singer-songwriter at ease with their wares, a brave wit and a bucketful of songs saturated in the simple sentiment of country music.

It may have helped that unlike on a previous occasion, she was largely preaching to a converted congregation. Tuning into Angaleena’s wavelength was entirely accessible as she set about proving that song-writing riches are aplenty far from the confines of Music Row. This is an artist who personifies the country cliché ‘three chords and the truth’ in her songs, to the extent of including the line in ‘Dreams Don’t Come True’. Angaleena also positions herself at the heart of a virtual movement to realign the gender balance in how mainstream country music operates. So to replace the rap segment of the controversial ‘Country’ with a snippet of ‘9 to 5’ proved ingenious.

Like so many live performances witnessed, the stand out moments come from an alternative source than that previously enjoyed on record. On Angaleena’s debut album, ‘Dry County Blues’ just eclipsed ‘Grocery Store’, but it was role reversal here. This was even though the former was the second song of the show to embed a classic, with on this occasion ‘Mammas Don’t Let Your Babies Grow Up into Cowboys’ getting the segmented treatment. The two other songs, which had their live status elevated, were the sensational ‘Outlaw’, complete with its infatuating chorus line, and a glorious oldie from the Pistol Annies days ‘Lemon Drop’. Throw in the fabulously cutting ‘Bless Your Heart’ and the crowned element of Angaleena’s set list sparkled in this artificially darkened afternoon setting of Sage 2. 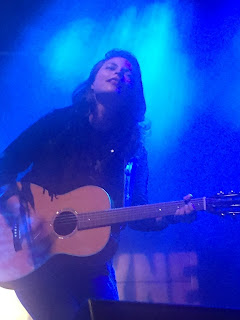 In another example of astute festival matching, one of Britain’s leading song writing talents leaning in an Americana direction – Danni Nicholls, was scheduled to open for Angaleena. Fresh from a similar supreme solo performance earlier in the month at the Maverick Festival, Danni sumptuously delivered a range of her songs from two albums, which are now firmly entrenched as extensively praised efforts. Stage timings obviously curtailed Danni giving the full background to songs such as ‘A Little Redemption’, but an appreciative audience got the abbreviated drift. This commanding performance ensured invited audience contribution to ‘Where the Blue Train Goes’ and ‘Back to Memphis’ was heeded, while ‘Beautifully Broken’ will always be up there among the highlights of any Danni Nicholls set. One footnote was Danni appearing to still find a feel for the new song ‘Ancient Embers’. This tune sounded great when first unveiled in Birmingham, further confirmed at Maverick and now sealed at SummerTyne. If fan reaction has any pull, it should be here to stay.

With Danni’s gorgeous songs still reverberating around the hall during the break, it didn’t take long for Angaleena to pick up the mantle and smash the ceiling with her subsequent display of country music in its purest state. Family; growing up in Beauty Kentucky; more family and adopting a full frontal attack on Nashville were all key features of this assured and perfectly controlled Angaleena Presley performance. A perfect sound pitch added to the enjoyment of a show where the artist latched onto an ideal balance of humour, anger and downright sentiment with the result a far-reaching success.
Posted by David at 20:56