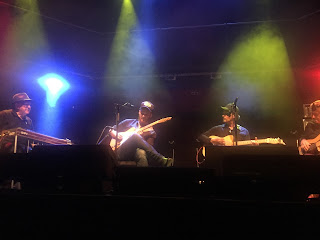 The surnames Haggard and Campbell are long locked into the annals of country music. However, it might just be a couple of different forenames, which tell the story in years to come. It was a scenario of the next generation as SummerTyne festival launched its ticketed presentation on the Friday evening of this year’s event. As an alternative to The Shires playing to the gallery of the masses in the main hall of Gateshead’s Sage venue, Ben Haggard, alongside his brother Noel, and Ashley Campbell set about carrying on their family legacy in slightly contrasting formats within the confines of the venue’s neatly compact second auditorium.

It has been just over a year since Merle sadly left us, but the spirit of The Hag was reigning supreme in the guise of two of his sons, plus a touring quartet keeping the Strangers name alive. Indeed an essential part of this combo dedicated to pay the ultimate tribute to an indisputable country legend is long time pedal steel player Norm Hamlet, an associate of Merle for close on half a century. As you would expect, some divine steel playing flowed from Norm’s instrument of excelled choice to coat a host of songs, including a wealth of country classics.

The evening’s ultimate contrast was in the styles of Ben and Noel, who worked in tandem to share a taster of their father’s work. It didn’t take too much deduction to see where the clear talent gene had taken root and much to Noel’s credit he paid sincere acknowledgement to his younger sibling, whilst intimating that he himself has gone from working for his dad to now for his kid brother. If Ben held the show together with his all round musicianship, Noel certainly embraced the notion of the outlaw, even to the extent of his uncanny physical resemblance to Merle.

This was the final date of a European excursion under the iconic moniker of Merle Haggard’s Strangers featuring Ben and Noel. Occasionally the set appeared a little chaotic with the wit often being the glue that held together the fragmented parts. There was also a mid to end segment where the crowd were perhaps yearning for more of the familiar material. This yearning was abruptly halted with a version of ‘Mama Tried’, swiftly followed by ‘Okie from Muskogee’ and ‘Sing Me Back Home’. Earlier in the set, which extended to just over an hour, the highlights were ‘I’m a Lonesome Fugitive’ and ‘Today I Started Loving You Again’, as we were quickly immersed in the picking skills of Ben and Norm. This was clearly a show to embrace what was on offer, which was an as authentic take on the work of Merle as you are likely to see, rather than lament those classic and personal favourites left on the shelf. A pondering observation of this performance was: where next for Ben Haggard? The attributes are aplenty to forge a highly individual career in country music and become a significant name in his own right. Soon the crossroads of the current tribute show will be reached and the future will reveal itself. 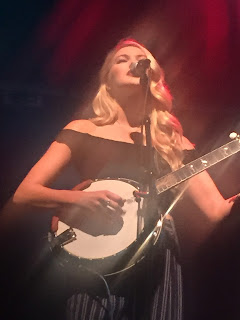 In contrast to where Ben Haggard is heading, Ashley Campbell has a firm eye on establishing herself as a distinctive country artist, away from the bright lights that will always shine on her relationship with father, Glen. In fact, most of the set that Ashley and her three supporting band members, including brother Shannon, played revolved around her upcoming debut album. While the key song from that is destined to be the wonderfully touching ‘Remembering’, written in response to her father’s Alzheimer’s diagnosis, other striking material setting out her stance included ‘Better Boyfriend’ and ‘Looks Like Time’.

Ashley combined her banjo and guitar playing with the clever writing of specific generational songs that have a useful knack of fusing the past with the present. While her songs were typically hot off the press for most of the audience, she didn’t shy away from the odd standard in ‘Jolene’ and the John Hartford song made famous by her father ‘Gentle on My Mind’.

You get the impression that Ashley realises the day is approaching when her music will need to stand alone, and all the signs are there that she can blossom on this front. Maybe this shared billing based on the family name did have particular designs, but Ashley left many favourable impressions of solo success being attainable.

Overall, this opening night presentation by the SummerTyne team proved the first of several smart scheduling moves across the weekend. It was great to celebrate the iconic names of Haggard and Campbell, but more importantly be exposed to the wealth of genetic talent in both families.