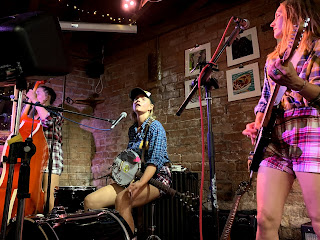 Baskery is a band that periodically flickers on the radar, usually when passing through town. A little delve into the archives throws up 2008 opening for Seth Lakeman in Wolverhampton, 2012 at Shrewsbury Folk Festival and a 2014 gig at the Kitchen Garden in Birmingham. You can now add 2019 at the last venue as the Bondesson sisters made a somewhat surprise and unexpected return. Yet a welcome one as the Kitchen can bring out the versatile side of a band set up especially when the multi instrumental operation can challenge the dynamics of an intimate space so often the domain of the solo singer-songwriter. Across two sets, each roughly 50 minutes, the trio bound through a thumping arrangement of songs, all structured by a mystical road trip starting in their home city of Stockholm before venturing out to Europe, America and even outer space.

A healthy gathering of the committed and curious gave the sisters (Stella, Greta and Sunniva) a receptive environment to ply their trade, one that heavily leans into the roots side of Americana. Combining the most stunning of sisterly harmonies with a banjo and percussion driven soundtrack ably supported by stand up bass and multiple guitar changes, Baskery conjure up a sound that races along, raucous in places yet controlled and measured. They are a band that enlists your focus and undivided attention whilst serving an appetising style of music.

Album releases have been strategically spaced out across their thirteen year existence as a formal band (informality likely stretches back longer). Back in 2014 songs from their most recent effort 2018s COYOTE AND SIRENS were previewed and fast forward five years, ‘Shut the Catflap’ and ‘Cactus Baby’ have fully embedded into the Baskery repertoire. Older favourites like ‘One Horse Down’ and ‘Oscar Jr. Restaurant’ from their full length debut record FALL AMONG THIEVES still sound good with the latter getting its origin from the Greek island of Rhodes explained in the song intro. Another port of call on their mythical journey. 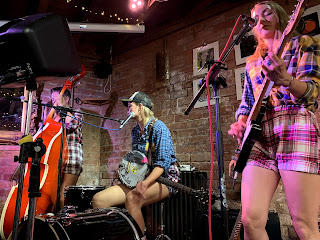 Similarly to five years ago, they still pay homage to one of their heroes, Neil Young, with a version of ‘Old Man’ and Sunniva still manages to momentarily play guitar while standing aloft on Greta’s kick drum in one of the shows more kinaesthetic moments. While there was so much similarity to previous Baskery shows, namely the energy, vibrancy and sheer intensity, you didn’t get much insight to where they are going as a band. Their American adventure seems to have tailed off with Greta commenting on Devon now being her home.

Maybe that is how the experience of Baskery is destined to be. Periodic gigs that capture the moment and album releases that hover on the horizon. However, when the force of their unison is in full flow, the live impact is packed with value adding qualities while stimulating the live music experience. A uniqueness surrounds the way Baskery go about making music and a little room will always be made, especially when they hit the road for exciting live dates like this.