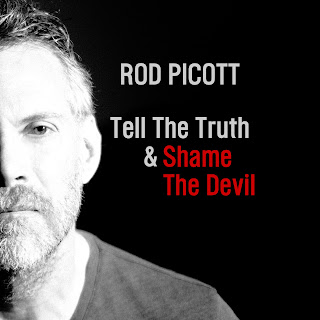 From a partially hidden gaze on the front cover, Rod Picott is in a mean mood as he slips out yet another album of self-reflective industrial grit. Even by his own substantive standards, this latest record sinks into the depths of a mind — troubled, pensive and ultimately grasping at faint shafts of light. To get TELL THE TRUTH & SHAME THE DEVIL out from the inner vaults to the ears of a somewhat tuned-in listener, Picott engaged no more than his guitar, harmonica, gruff vocals, fertile mind and a living room-style setting appropriate to disseminate such candid thoughts. There was an extra helping hand from Neilson Hubbard to mould the recordings into a more palatable state, but this takes the term ‘stripped back’ into new territories and it wouldn’t be amiss to stamp some sort of ‘content warning’ on the cover.

This album challenges the notion of a third way when engaging with a record. If you get to the end of the forty-seven minute playing time, you are likely to be a fully paid up member of the Rod Picott Appreciation Society. All other entrants will likely fall at the first hurdle, with newbies probably requiring a dose of Picott’s greater produced back catalogue to ease themselves into the work of one of the most intense songwriters you are likely to encounter on the contemporary Americana scene.

On a record where a personal health scare supplied the canvas to see these songs flow, mortality features prominently whether reflecting on the suicidal demise of one real life character in ‘Mark’ or the deeply personal outpouring in ‘A 38 Special & a Hermes Purse’. The latter sinks to its knees with the line ‘I’m a train wreck turning Beaujolais to piss’, but the good news is the parting track, ‘Folds of Your Dress’, shares a touch of hope and Rod Picott is still alive and kicking to tour the album in the UK in the autumn.

Alongside mortality, nostalgia plays a strong part, although you could say the two concepts go hand in hand. When staring back at past events, ‘Mama’s Boy' considers masculinity, ‘Spartan Hotel’ recalls live music in its most basic form and ‘Sunday Best’ takes a twisted look at the mundane. To get the best out of the twelve songs, reading the liner notes is an essential companion. Context is key to how these songs played out and the subsequent importance of the vehicle adopted to share with a fanbase, one likely to be hardened to the stern stuff.

Rawness and complexity melt into the listening experience of TELL THE TRUTH & SHAME THE DEVIL. Although a fan of Rod Picott’s music for over a decade, this was still a tough album to grasp, suggesting a contradiction to the earlier point that a third way doesn’t exist ie you’re either in or out. The jury is still out as to whether this record in its primal format reaches out past a core, but it is probably the most important album of Rod Picott’s career and may clear the way for a prosperous future where recognition of his stellar song writing skills sail above any facet of self doubt. You cannot deny this guy makes interesting albums and surfacing on the other side is an invigorating experience.

TELL THE TRUTH & SHAME THE DEVIL is out in the US and available for listening on overseas platforms. It is scheduled for a formal UK release on September 6th and sure to be available at most Rod Picott gigs subject to the inevitable sold out sign.