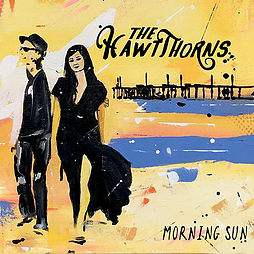 Open an album with an absolute belter of a track and you’ve got your name on the board. Follow it up with several other strategically placed crackers and you’ll get yourself on repeat mode. Make a smart move in covering a John Moreland song and folks with an acute ear for a finely crafted lyrical masterpiece will pay attention. Alternatively just make a record that finds its audience with arrow-like precision and the great minds of artist and discerning listener will align as designed. Through the body of their debut release MORNING SUN, California-based duo The HawtThorns have all the aforementioned attributes nailed on and are now set on the next path to widen the appeal of music fully deserving of extending far from a home base way out west.

The HawtThorns is the slightly modified moniker for the artistic output of husband and wife duo KP and Johnny Hawthorn (the extra t remains a mystery). They bring a vast experience of rock, pop and country music into the style of their newly founded operation and you won’t be surprised to learn that such a melting pot of sounds is likely to see a gravitational pull to that, ’catch all waifs and strays’ entity’ - Americana. While mere words are required in this medium, once the album moves into listening territory, its own laudable attributes take over to ensure any risks on those taking a punt on a new name evaporate quickly.

The bright and breezy opener ‘Shaking’ is everything you want from a catchy tune set loose to snare its prey. Being seduced by this song is not a bad expense of your listening time and who can resist an infusion of well-crafted pop. Where you place this track is down to individual interpretation (check out the promotional video below), but a slice of 00s pop country was detected with a striking resemblance to Sara Evans’ ‘A Real Fine Place to Start’ jumping out in parts.

It may seem a little ingenuous to comment second on the sole cover among ten originals, but a version of John Moreland’s ‘Nobody Gives a Damn About Songs Anymore’ struck a major chord. Apart from being a guilt edged piece of lyrical composition, it did send a signal that we are likely to hear more of this Oklahoma singer-songwriter’s classic material in the works of others, especially as his living legacy gathers pace. The HawtThorns don’t make a stab at owning the song, but just a mere acknowledgment and celebration of a precious art form is fine.

Other songs to resonate strongly in the opening shots of this record’s life include a classy acoustic duet closer in ‘Lucky Charm’, creating the perfect bookended combination with the stand out opener. Midway through the album, ‘Give Me a Sign’ shines like a beacon and multiple plays see second track ‘Rebel Road’ advance with appreciation despite being slightly overshadowed by the opener; a recurring theme of this review.

The chances of The HawtThorns being more than a distant mark on the horizon (with a great record, mind you) are greatly enhanced by a tie up with the label Forty Below Records, which has connections in the UK and have recently led to Jamie Wyatt and Sam Morrow touring our shores. Should this occur with The HawtThorns, the queues can start now.

Everything you require from an affable and freely accessible Americana album is wrapped in MORNING SUN. Maybe a freudian symbol in the title that the dawn is just breaking for this phase of a career that should prove fruitful for KP (formerly Kristen Profitt and owner of most of the vocals) and Johnny Hawthorn (the prime guitar architect). The HawtThorns have arrived and plenty will sit up and take notice.