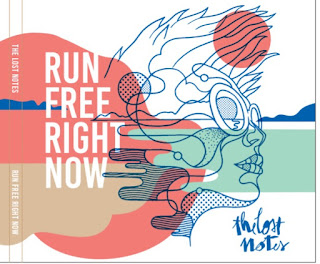 While roaming the world digitally for romanticised music has long been an influential source, occasionally it is worth pulling your horns in a touch to check out what is happening under your nose. Birmingham based band, The Lost Notes have been knocking on doors around the local scene for a while, often getting opening slots for overseas touring acts. With most of these artists being of a folk/Americana/acoustic tilt, this local combo have proved an ideal fit with their authentic approach to stripping innovative lyrical-laden music down to an agreeable form. Now it’s the turn of The Lost Notes to take on the role of a recorded outfit with the release of a debut album titled RUN FREE RIGHT NOW.

Essentially, the album rolls out with eleven self-penned tracks plus a bonus of two offered in an alternative format of a live version and vocal remix. ‘Bobby’ is one of these tracks, with a live recording captured at the Tower of Song, and probably sits at the summit of the album’s appeal when conclusions are drawn on a track-by-track analysis. The band revolves around a core of Ben and Lucy Mills sharing vocal duties alongside Oli Jobes seemingly being the prime instrumental architect. Lucy takes vocal lead on ‘Bobby’ before the trademark harmonies kick in, and is the band’s singular stab at writing a traditional country ballad. As intimated, this album does not settle on a signature sound, but the impressive attributes of this number provide food for pondering.

Essentially, The Lost Notes comes across as a jaunty upbeat outfit, expressing itchy feet across the acoustic spectrum. A light hearted approach  underpins the initial appeal of the music, although issues do emerge in songs like ‘Banker’s Blues’ and ‘Leader of Men’, whether tongue -in- cheek mode or not. Spritely opener ‘Green Grass’ does possess some philosophical undertones if you choose to delve deeper, but the overall vibes is that of it being unconditional music leaving the listener at their entire leisure to how they take the offering.

Other tracks that score highly include the initially impressive ‘Take My Hand’, the harp blowing bluesy effort ‘Stone in My Shoe’ and ‘I’ll Wait Until the Sunrise’; the latter came more to the fore after seeing The Lost Notes support the Wild Ponies at a recent gig. Frequently, they perform in a streamline trio, but studio-wise the sum is expanded into a full band operation including bass and drums. This format occasionally gets a live outing and this will certainly be the case when the album gets its full launch at a headline show in early December.

Living the dream is a commendable place to be, whether recording an album or composing written reviews. Letting the breadth of your talents roam free, seeing where they lead and enjoying the journey is the perfect idealistic stance. RUN FREE RIGHT NOW is the sum of a journey that comes across as one being enjoyed. The Lost Notes have also crossed the boundary to where a record can do the heavy lifting in lieu of continual gigging and it possesses an entertaining streak to ensure the journey keeps right on.