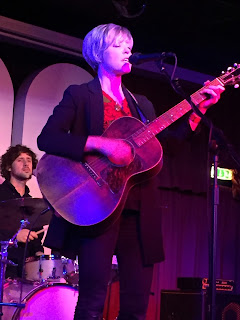 Back in January, the gig year began with a show featuring Emily Barker, and it was a pleasure to welcome her back to the Midlands area as part of a tour that has formally put a seal on her latest album. Although songs from SWEET KIND OF BLUE were previewed on that last visit to the nearby Worcestershire town of Bewdley, which was in a duo format with Lukas Drinkwater, the assembled band format for this Glee Club date gave the tracks the deeper sound that they warranted. Emily Barker is more than the sum of any record she has released and remains one of the most fascinating artists on any circuit that embraces her style. This may be a style forever tinkered with, but a gold leaf streak has been consistently threaded within her releases.

Emily is no stranger to The Glee Club and wasted little time in reminding folks how she has become a valued artist who constantly seeks to explore the wider canvas of contemporary roots music. ‘Dear River’ opened her ninety-minute set and still sits on the pedestal of her recorded tracks. No doubt, fans will proclaim the widely acclaimed ‘Nostalgia’, but from my perspective that comes a close second to the sound that gave her most credence to being classed as an Americana artist. There is an argument for the best not being served up first in a live outing, but the harmonium to electric guitar intro perfectly set up the breaks and melodies that make this track such a pleasure to hear time and again.

The architect of this harmonium to guitar part was Pete Roe, who proved the busiest person on stage during the evening. As well as this segment, he excelled on the keys, which is such an integral element of the soulful direction that Emily explored on the new record. This was also in addition to the thirty-minute opening set he played to warm up a Sunday evening crowd almost caught out by the 7:15 start. After this brief stint in the limelight, Pete settled back into the supporting role alongside regular bassist (both stand-up and electric) Lukas Drinkwater and Rob Pemberton on drums. Together they proved the perfect foil for Emily’s songs to flourish, in tune with her own guitar and harmonica playing.

In addition to the two older songs previously mentioned (with ‘Nostalgia’ getting its accustomed Wallander connected story), a memorable version of ‘Ghost Narrative’ from the 2013 DEAR RIVER album was among the pick of a set list, which eventually ran to seventeen pristinely delivered songs. Inevitably, it was the tracks from SWEET KIND OF BLUE that proved the spine of this gig, with the title number being given renewed vigour in light of its live version.

This album was Emily’s metaphorical and literal trip down Memphis way and a lauded attempt to capture a sound swinging from the dark bluesy tones of  ‘Sister Goodbye’  to the right up-to-date groovin’ vibes of ‘If We Forget to Dance’. While the album itself has taken a while to settle within my listening repertoire, the songs possessed a strong feel in the live arena with these two tracks  being the pick of the new material alongside the rather gorgeous ‘No. 5 Hurricane’. Maybe the upbeat material would have felt more at home on a late night Friday or Saturday than early Sunday evening, but the notion of ‘inside I’m dancing’ could not have been truer.

There was still time for Emily to excel in the encore when she strolled back on stage to deliver a perfectly executed unaccompanied version of ‘Precious Memories’. This ensured the evening had one more hairs-standing moment before everyone dispersed into Birmingham city centre for an early finish. Of course, we know that she will be back, but what may not be so certain is what style is next on her agenda of discovery. Soul, folk, Americana, lo-fi indie and cinematic ballads have previously caught her ear, and maybe there is further mileage in the traditional country sound that inspired the Applewood Road project. Whatever course she undertakes, the quality stamp mark via her talent and astuteness will be proudly displayed.

Debate may exist when considering the overall impact of the Emily Barker shows in Bewdley and Birmingham this year. In my opinion, the fullness of the latter won hands down, and another example surfaced of a live show illuminating an album that perhaps needed a little nudge.