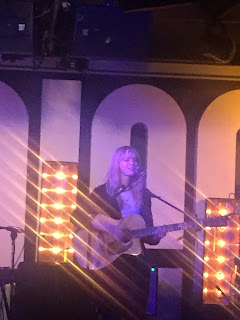 Regardless of what has happened in the past or may do in the future, 2017 will go down as the year Lucy Rose released the most adorable album and took all its divine beauty on the road with her. SOMETHING’S CHANGING also possessed an intriguing backdrop fuelled by an artist asking some of the most fundamental questions as to their creative existence. Therefore, it was no surprise to see Lucy in a candid frame of mind as she set about sharing some of her craft with a packed Glee Club audience. Amidst the lucid concerns and musings, the subliminal art of serving a record in a format that defined its personal intensity was plain to see.

It helped that the couple of hundred souls cramming into the venue’s main room created the pin drop atmosphere required to savour the album’s subtle brilliance. However, this presented the evening’s first conundrum as Lucy came across between songs as being slightly unnerved by the surroundings. This did not affect any of the songs’ pristine delivery, but further suggested an artist seeking an identity. This assertion is made without any prior experience of a Lucy Rose concert; yet sampling the production found on her previous two albums would suggest a more upbeat environment. One hope from a personal angle is that Lucy enhances the tentative steps that she has taken in the new direction and grows fully into the role. The vocal style, song writing sentiment and subtle production are all in place to make evenings like this a regular occurrence.

Lucy was joined for this tour by four other flexible musicians, with segments of violin being most pertinent to the feel of the new record. Lucy herself shifted between guitars and piano, the latter the accompaniment to the set’s standout moment in ‘Second Chance’ and an old song. ‘Our Eyes’, which was introduced as a stripped down version of a previously highly produced track. This was also the band responsible for the new album, so they were finely tuned in their roles to ensure the presentation was precisely shaped. Therein laid a similar thought to another accomplished artist heard live recently, in finding a differentiation between a studio and stage version. To some, a seamless ear is an expectation, while others prefer to find some distance between the different formats.

Apart from, by memory, the entirety of the new album being played, the set occasionally delved back into the past catalogue to serve up numbers like ‘Middle of the Bed’ and ‘Like an Arrow’. These by encouragement were given the pin drop exclusion and gained enthusiastic responses. By admission, I attended solely because of the new record, but it was difficult to gauge the extent of this across the room. Obviously, the response was rapturous at the end, although the general feel was a little different to when other artists, especially from overseas, play this type of music. Like all the questions being pondered, time will be adjudicator, especially in where Lucy finds the next inspiration for future projects.

It is always good though to focus your mind on the present and listening to songs like ‘Floral Dresses’. ‘Moirai’ and ‘Find Myself’ in this situation was an absolute pleasure. Aside from a slight sense of identity issue, Lucy was frank with the inspiration for her current direction and this was best summed up with the album’s closing track ‘I Can’t Change It All’. Maybe in the future similar inspirational ideas will crop up just like a South America trip did for 2017.

To add to the evening’s presentation, a singer-songwriter from Leighton Buzzard by the name of Charlie Cunningham entertained the gathering with a batch of self-penned material. A prominent vocal style matched with some intuitive guitar playing, crowned with a mini Flamenco piece, eventually placed his performance in the credit column. He was certainly an artist who thrived in the pin drop atmosphere and possessed the talent to carve out a niche on any circuit he frequents.

While it will be fascinating to observe how Lucy Rose creatively evolves in the future, the existing memories of this year’s precious album will always remain, alongside the evening in Birmingham when its heart and soul were beautifully shared.