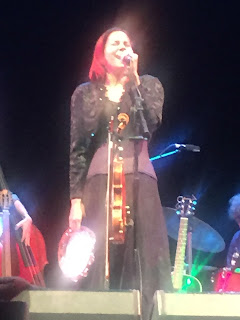 Rhiannon Giddens has to be one of the most vibrant and dedicated advocates of American roots music currently active in the public eye. Throw in an extraordinary talent that spans the artistic spectrum and you have a sure fire way of ensuring your message gets across to expanding audiences. Spare seats were at a minimum in the Town Hall this evening as Rhiannon and her band set about ensuring this return to a Birmingham venue ended up a resounding success. In contrast to a recently seen gig at this venue, this show went beyond the ninety minutes set mark, thus maximising the diversity that bubbled in the musical presentation. Whether celebrating original British Isles emigration to the Carolinas or a revival of Cajun/Creole culture in the sixties, the quality and absorbing nature of the music beamed in harmony with the venue’s ever manoeuvring lights.

The crowning moment of Rhiannon’s post-Carolina Chocolate Drops work has been her latest album FREEDOM HIGHWAY, and the fruits of this ambitious project have really come to life on this current UK tour. There has been moments since the record’s release in February when it struggled to make a similar impact to her solo debut TOMORROW IS MY TURN. This was purely from a personal perspective and one significantly altered since returning to the record in the run up to the tour followed by witnessing the album act as the cornerstone of the live show.

For this tour, Rhiannon has surrounded herself with all the key architects of the album. Its co-producer, and frequent Transatlantic Sessions participant, Dirk Powell flanked Rhiannon to her left on everything from fiddle, guitar to piano and accordion. To her right was long-term band mate Hubby Jenkins, adding to the sound some sterling electric guitar work and occasionally the inventive bones percussion. Behind the front three were two other players on the studio album in the guise of Jason Sypher on bass and Jamie Dick on percussion. Whether in perfect unison or individual flair, the effect from this fine band of musicians provided the perfect framework for a bunch of traditional and original songs to flourish.

Peaks to the show were plentiful to consider, but the mid-set duo of ‘Water Boy’ and ‘We Could Fly’ lay the marker down for any other segment of the evening to follow. The strains of Rhiannon’s vocals on the former, a tribute to Odetta, left the audience gasping. This took her talents to a new height alongside the banjo, fiddle and creative nous to dig deep into the past to illuminate the world of folk music. 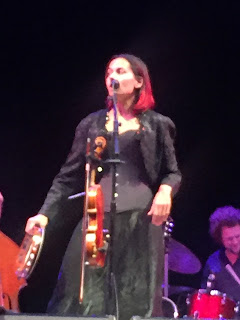 While on the subject of vocal prowess, Rhiannon was frequently joined by her sister, Lalenja Harrington, which included a slice of sibling gospel harmony on one song. Just to ensure the authenticity of the new album was relayed on stage, Rhiannon’s nephew Justin Harrington appeared, to re-enact his spoken word part on ‘Better Get It Right The First Time’ and give the proceedings an ultra-contemporary edge.

If you wanted a pointer to the significance of Rhiannon’s archivist work, the introduction to ‘At The Purchaser’s Option’ was the starkest evidence. Frequently, we were reminded that the battles of one hundred and fifty to two hundred years ago are not quite over, validated further by references to her homeland since January 20 2017. Ultimately, the evening wished to balance the inevitable melancholy of digging deep into a history of struggle with a perpetual hope. This was best initiated in a cover of Pop Staples’ ‘Freedom Highway’ as the pre-encore stomping closer, and a dual cover of Sister Rosetta Tharpe’s ‘Lonesome Road’ and ‘Up Above My Head’ to bring the overall evening to a sumptuous close.

This was an evening that began two and a half hours earlier with an opening set by Canadian roots artist Kaia Kater, complete with banjo and a bundle of growing charisma. This was actually the second of three Birmingham visits for Kaia in a six –month period. Back in the dying embers of the summer, she impressed with a set at Moseley Folk Festival, and is due to return for a headline show at the Kitchen Garden in February. You have a feeling this artist is going to develop neatly in the slipstream of Rhiannon Giddens on the evidence of the work she has produced and is likely to in the future.

The future is also looking rosy for Rhiannon, especially with the role she has been offered of guest curator for next year’s Cambridge Folk Festival. Part of this will lead to her unveiling some new talent on a UK audience and signals a desire to re-acquaint oneself with this mid-summer extravaganza of roots music. However, this Birmingham Town Hall show was all about the present and the eventual showcasing of Rhiannon Giddens as a world-class artist on a stage that she totally owned. American roots music could not be in better hands than this interpreter, revivalist and all round exceptionally talented artist.