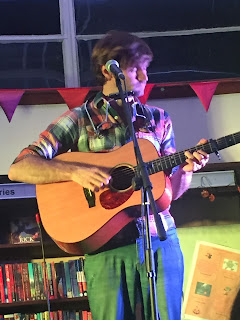 John Craigie may not be a well-known name yet on the UK circuit for touring American artists, but this is set to change. While it is easy these days to seek recorded material online, the counter balance is the sheer magnitude of what is out there competing for your leisure pound and afforded time. Networking, connections and recommendations play a substantial part in spreading the word of an artist, more increasingly imperative when resources restrict the level of funded PR. However, the biggest stake artists like John Craigie can put in the ground is to get in front of folks and let the blossom of their talent takeover.

For this inaugural tour of our shores, John has secured a comprehensive list of dates the length of the country and one guarantee is that audiences will be captivated by the show he puts on. It helps if you possess an extraordinary flair for nailing the art of entertainment, especially when it comes to marrying the close alliance of wit, satire and conviction with the timeless appeal of the folk-inspired acoustic guitar.

As the tour reached the midpoint, there was no more appropriate place for an artist like John Craigie to be than the homely surroundings of a community library. Among the throngs of literary content, the wares of a travelling troubadour settle and prosper. Such wares mingle in the guise of stories and songs, often infusing a social awareness, while balancing the microcosm of personal experience with the progressive tendencies of a wider world.

Apart from a comfortable backdrop and warm welcome, Thimblemill Library, in the deepest confines of the expansive urban West Midlands, afforded John the spacious zone of over an hour and half in the spotlight. Maybe a touch different to thirty minutes supporting Jack Johnson in a twenty thousand packed arena, but the true test of any performer is to let your art work its magic in any environment.

At this point, readers can become listeners to grasp more about the music of John Craigie in the usual sources. This is highly recommended. Without preaching too much about the obvious, you will discover the archetypal American folk troubadour. A performer holding onto the traditional ideals that forged ahead in the sixties, while also applying a nod to Woody Guthrie, without harking back too much to the past. Most importantly though, John is fully embedded into the contemporary power of song.

As you would come to expect from a folk singer based in Portland Oregon, politics does play a small part, but it is probably a more general liberal outlook on life and perceived social commentary, which spearheads John’s songs and stage presence. Aside from the songs, many of which can be found on his albums, this show shed an entertaining light on growing up and residing on the West Coast and how its communities interact. Ranging from the relationship between Seattle and Portland, ordering a late night mac ‘n’ cheese to receiving a certain kind of university education and serving brownies at an election party, the lengthy interludes between songs never outstayed their welcome. 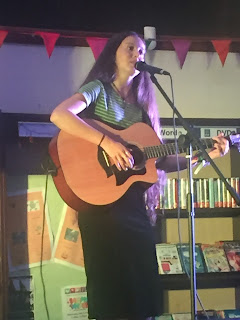 Right from the off, John played a bunch of songs that fluctuated from the humorous to the cutting. Each one made an impact, either to bridge a story or just put a Friday night smile on the faces of the audience. His only diversion from the self-penned effort  was an encore version of Led Zeppelin’s ‘Going to California’, poignant in its sentiment towards John’s home state and the proximity he was currently in regarding the roots of  the original’s lead singer.

To launch another successful evening presented by the events team at Thimblemill Library, Coventry based singer-songwriter Izzie Derry made a return appearance in the area to share her songs and prove an ideal opening act for John. Izzie is beginning to make a name on the local scene and what she brings to the stage is the innovation to stretch her talented vocals. The songs are showing positive signs of developing alongside how she utilises the acoustic guitar. She is definitely an artist to look out for as she forges a path for her music alongside life’s other demands. John’s continual courtesy towards Izzie added to the cordial atmosphere of an evening that resounded to the artistry that a single performer and their powerful plugged-in accomplice can weave.

In what can be a crowded world of the solo acoustic performer, even those crossing the Atlantic to reach out further, John Craigie commendably stood out from the posse with a welcoming left field effect. Hopefully, sufficient interest can be generated from this visit to make these trips a regular occurrence. Thoughts turn back a decade to when Otis Gibbs first made tentative steps to share his songs in our listening rooms. If John Craigie comes even close to replicating the onward trajectory that rolled out from that point, there will be a load of satisfied music fans throughout the land. Allow him the space and time, and this guy will deliver. 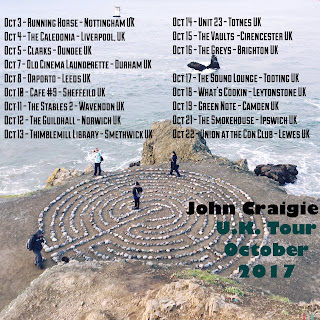