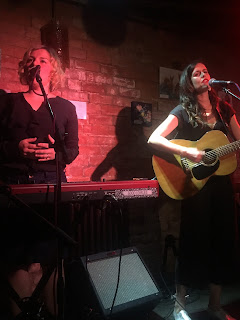 Four years gone in the blink of an eye. Well, technically two since the Good Lovelies last hit our shores with a short curtailed visit to promote their last album. However, you have to go back to 2013 when they previously played the West Midlands and that never to be forgotten gig at Star City. The curiosity of that show has grown over the years despite not even being present, although over an extended weekend of that tour their sets in Oxford and the Maverick Festival were both delightfully savoured. So in effect, this Kitchen Garden show rolled out as a renewed Birmingham debut and the Canadian trio succeeded in impressing fans, both new and old.

The province of Ontario had been the original base for the trio of Kerri Ough, Caroline Brookes, Sue Passmore (although Kerri announced early in the gig that she now lives in New Foundland), and they have represented their homeland splendidly on the international music stage for close on a decade. Their affable style of harmony-blessed acoustic folk has warmed the hearts of many an audience with a sound that has ebbed from the staunchly traditional to a venture into a more contemporary pop feel. Possibly the biggest sonic step was the production vibes that steered the latest album BURN THE PLAN. Having missed out promoting this 2015 release in these parts on the previous tour, it formed the centrepiece of this evening’s twin sets. Opening with ‘Don’t Hold Back’ and closing the pre-encore segment a couple of hours later with ‘Old Fashioned Love’, the tempo of the newish songs was defined by the delicate strumming of Caroline’s electric guitar and the keyboard excerpts of Kerri, to complement her banjo and acoustic guitar playing.

One aspect of the Good Lovelies that is inescapable is their organic roots DNA. It only took the second song of the evening for Sue to step up from her percussion role to lead on ‘Made for Rain’, which was close to defining the traditional leaning sound that formed the material housed within the 2011 album LET THE RAIN FALL. Also from this record, ‘Crabbuckit’ sounded as fresh as its first airing a number of years ago, delivered with the sole accompaniment of MJ Dandeneau’s stand-up bass. In a burgeoning role as one of Canada’s top ‘go-to’ touring bassists, MJ has reunited a  previous stint of being the ‘fourth Lovely’ for this tour and continued to play an integral part of providing the framework for the songs to blossom. 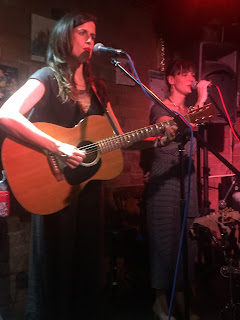 Perhaps, the key factor projecting the value of the Good Lovelies is the impeccable timing and close-knit composition of their varied harmonies. These were prevalent throughout the show and closely followed by illuminous stories bridging into such revealing songs as ‘Best I Know’ and ‘Sleepwalking’. The informal chat was held in the same egalitarian manner as the way the vocals are shared. Vocally, it was hard to top the off mic encore version of ‘Your Long Journey’, although another foray into the works of others via a stunning rendition of the David Francey song ‘Torn Screen Door’ was almost its equal.

As you would expect in an intimate Kitchen Garden gig, invited polite audience participation came to the fore, ranging from murmured interludes to the infectious lengthy chorus of ‘Lie Down’. Outside the aforementioned songs, ‘Daylight’ came across as a strong offering and ‘Waiting For You’ possessed a more stripped down feel than the version that was heavily promoted with the last album. The future was also not left out with the band announcing a new album set for release in the New Year, whilst giving an insight to its wares via the tracks ‘I See Gold’ and ‘This Little Heart’. The most positive promise of the evening was Kerri keen to not repeat the significant gaps between touring comprehensively, although expanding families has been a valid reason.

To open for the Good Lovelies, a new name was presented to the Kitchen Garden faithful in Leamington Spa based young singer-songwriter Joe Dolman. An innate vibrancy adorned his acoustic style as he confidently displayed the traits and song writing adeptness to court a significant following. Possessing a smart mind to go along with an acute ear is a useful ally and one set to serve Joe well as he plots a strident course in what can be a crowded field.

Knowing how to present a warm glow to an appreciative audience has long been a redeeming feature of the Good Lovelies. In the four years since last catching them live, none of the magnetism has faded. The songs continue to effortlessly breeze into a hushed zone and the often overused ‘less is more’ analogy has never been better suited than to the music that this band creates. Finally, if those harmonies can be bottled…