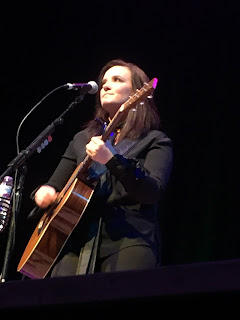 Cutting an isolated figure on stage, Brandy Clark adopted the pose of the archetypal country music singer and ensured that true to the genre’s identity, the songs nestled right at the heart of the show. For just over an hour tonight, you were taken back to the idealistic days of 2013. This was when 12 STORIES emerged from a little known label in Texas called Slate Creek Records and an established songwriter from Morton WA edged tentatively into the world of the recording artist. Four years on and the continued most important assertion is that the music of Brandy Clark matters.

Presently, Brandy retains the status of an artist signed to a major Nashville label. Therefore, exposure and connectivity has enabled her to develop a fan base sufficiently to grow the Birmingham show from the homely surroundings of The Glee Club to the more lavish environment of the Town Hall in twelve months. While the audience growth settled somewhere between the size of both venues, there was only a minor adjustment to the presentation. When this gig sprung up, thoughts turned to a full band operation and a sound more akin to what greeted fans during the first half of her sophomore album BIG DAY IN A SMALL TOWN. However, what we were introduced  to was a similar acoustic show with just the double bass of Vanessa McGowan joining Brandy and her regular lead guitarist Miles Aubrey.

Long may this remain the de facto format for Brandy Clark as it optimises the baring of her songs’ souls. Even numbers like ‘Girl Next Door’, which had designs for more populous platforms, take on a new light when stripped down. The gentle caressing of the bass with a bow added a slice of morbidity to ‘Three Kids No Husband’, and while you think Miles could excel on his own in another setting, the supporting role he plays is invaluable when applying the thought generating interludes to Brandy’s songs. One development pleading out for is a pedal steel player in this format. The songs ache and what better accompaniment that some soothing twang. 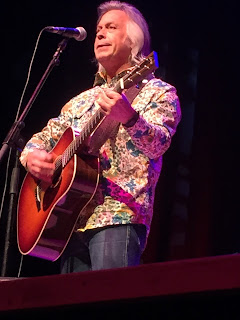 For the second leg of the UK tour, Jim Lauderdale has jumped on board to take on the role of the supporting act. It is a credit to his overall integrity and versatility that such a legend, not just of the Nashville scene but across the wide spectrum of American roots music, can adjust to this mode and pull it off with a double dose of humility and class. It is likely that some new converts to Brandy are not aware of who Jim Lauderdale is. Watching him for half an hour renders that ignorance obsolete. Just soaking up the influence for ‘King of Broken Hearts’ was worth taking your seat in the hall early and if one person left thinking ‘I should check out this Gram Parsons guy’ then mission accomplished. Of course, Jim has his own albums to sell and the latest release LONDON SOUTHERN is probably one of the main reasons he has come to Britain on at least three occasions this year to play a variety of different shows.

Just a minor gripe now and one which savouring Jim Lauderdale slightly alleviated. For an artist of Brandy’s stature and the outlay for the show, she should be playing for a minimum of ninety minutes not the seventy allotted to this performance. The vast majority of touring artists at all levels offer this and any rationale will not wash here.

Gripe over and now back to the reasons that this was still pushing the upper echelons of a lengthy 2017 gig schedule. The set list was almost evenly split comprising  of half a dozen songs from each album plus an assortment of unrecorded material and the ubiquitous cover. The latter for this show was the Dean Dillon/Hank Cochrane song ‘The Chair’, famously cut by George Strait. The other unrecorded songs included ‘Apologies’ – introduced as a new one – and ‘When I Get to Drinkin'’, which recently appeared on the live album. Another unfamiliar song in ‘Favourite Lie’ joined an outstanding opening set trio alongside ‘Hold My Hand’, setting a near unparalleled lofty bar, and ‘Love Can Go To Hell’, showing the power of the stripped back version. 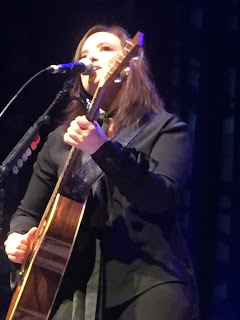 Despite the general low key vibes of the show, popular numbers like ‘Stripes’ and ‘Pray to Jesus’ got the crowd involved. Vociferous reactions were also reserved for the substance-inspired song ‘Get High’ and the alternative revenge piece ‘Daughter’. Apart from the opening number previously mentioned, the other personal highlights were the intrinsically countrified ‘Drinkin’, Smokin’, Cheatin’’ (what else do you expect from an apostrophe overload) and the satisfying singalong ‘Big Day in a Small Town’.

Brandy herself has slipped into the consummate role of the relaxed touring performer, at ease with audience interaction and introducing her songs with an element of impish vagueness. The usual subjects for country music material are aplenty and we were even given a hint of a complete album of drinking songs, should there be room for one! While Brandy tends to guide her writing in the direction of the third person character, it does ponder a thought in how she might focus her exceptional skill inward, with no doubt many a story to tell. Observing this performance also lent a moment to wander into the future zone of where her career is heading. This relates to the current construction of the country music landscape, especially on the fringes of the mainstream. What Brandy can do is cut her own niche and build on the momentum of the last four years to develop her trade in a conducive environment.

Hindsight may well elevate the pairing of Jim Lauderdale and Brandy Clark to another level. Together they put on a super show majoring on what is important and crucial to the preservation of country music as a standalone art form. Brandy ended by saying ‘continue to buy my albums and I will continue to cross the pond to play’. As long as she gets the astute decisions right, opportunities will prevail.