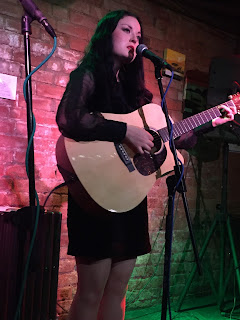 Some artists require a shoehorn to slide into their intended genre, while others effortlessly glide between different camps. Emily Mae Winters possesses the ultimate entertainer’s gift of being completely at ease in whichever facet of her singer-songwriter art comes under the microscope. With a debut album now in the locker, and an increasing run of live shows under her belt, the cork to her potential has been popped. Where this leads her will no doubt be down to a combination of fortune and desire, but the eager anticipation of being party to this in a fan role is an exciting proposition. To be on the brink of a sell-out on a first headline appearance at the Kitchen Garden is no mean achievement and the evidence of her innate talent was on stark display during the time in the spotlight. Make no mistake; Emily is here for the long term on a platform that may yet evolve.

Maybe driven by a spate of artistic independence, Emily is steering clear of the pigeon hole status, while putting down some exceedingly deep rooted markers. It would take a bout of stubborn ignorance for the folk world not to embrace her style, especially when she saunters into the realm of the traditional song. This evening Emily’s versatility stretched from re-connecting with her partial Irish roots through the fairly conventional ‘She Moved Through the Fair’ to a braver dip into the English scene with a version of John Connolly’s popular tune ‘Fiddlers Green’. Two commendable efforts, although she did reveal an occasional mixed reaction in folk club land to the latter. Perhaps tinged with a little trepidation.

Yet for me, on the evidence of catching her live for two hours across a couple of contrasting Birmingham venues in the last few months there is an embedded trait to successfully spearhead a uniquely British challenge to the classicist contemporary American singer-songwriters who reign supreme in such a domain. Evidence for this came threefold, initially in the guise of two beautifully crafted covers of Emmylou Harris’s ‘Red Dirt Girl’ and ‘Killing the Blues’, taken from the iconic Krauss-Plant RAISING SANDS album. However the prime mover in rationalising my view on Emily’s strength is a gentle wobble in her voice that is so reminiscent of Natalie Maines when she took those Dixie Chicks ballads such as ‘Without You’ and ‘Top of the World’ to another level. It also differentiates Emily from the archetypal English folk singer, often formed by a crystal fragility. From this evening’s show, ‘Hook, Line and Sinker’, ‘Miles to Go’, and most pertinently, ‘Blackberry Lane’ further cemented this highly valued assertion.

Aside the covers, of which we had an encore treat as well, and the traditional pieces, Emily’s ability to write her own songs is proving to be a significant part of the skillset. A love of literature especially the poetic verse has a major input in this area. Joining the three songs just previously mentioned, ‘Siren Serenade’ is another outstanding effort in this field. As well as doubling up as the title of the album, this song is emerging as a popular live number, with this evening’s configuration of the Kitchen Garden perfectly adhering itself to the dual blending of audience generated harmonies. The effect was like something straight out of Oh Brother Where Art Thou. 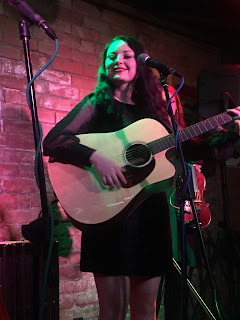 Joining Emily for the show were regular double bassist John Parker and Virginia Mahieu on fiddle. Both played their part in the success of the evening. Although strength in numbers is always a smart way forward when practical, you do get the feeling that Emily retains the natural charisma and flair to hold an audience on her own, especially in intimate venues like the Kitchen Garden. This side of her personality stems from an unfulfilled theatrical desire, though if you are going to appear in one film as an extra, why not it be a Ken Loach production. Certainly a reason to view The Wind That Shakes the Barley when it is aired again.

By the time Emily sent the audience on their merry way with a final dip into the popular songbook via a communal version of ‘Will You Still Love Me Tomorrow’, the deal had been sealed. Maybe audience – performer song keys were not perfectly aligned, but classic songs transcend awkward moments. What had been nailed on was an artist of extraordinary talent and one to absolutely take the vision of the contemporary singer-songwriter forward in this country, and perhaps beyond.

Joining Emily on the bill for this show was another emerging singer-songwriter by the name of Jack Hopkinson. He used the window of the opening set to make a valid case for engaging in his credentials, which once again spread out from a UK base to absorb some of the influences spawned from venturing thousands of miles in a westward direction. Alongside a song about Nashville, a cover of the James Taylor standard ‘You Got a Friend’ and numbers from his latest EP SECOND HAND LOVE, the most profound moment from Jack’s set was a new song titled, from memory, ‘Take It From Me’.

Who knows where Emily Mae Winters is going to take her music? There is a school of thought to just enjoy the present, but an artist who stands still will wither and fade. This is unlikely to happen here with so much burgeoning talent and hopefully the passion to develop it. The winners are destined to be those who connect with her music. Maybe the final destination or not, but the thought of taking on our American cousins at their own game has just flickered a little brighter after discovering this artist.