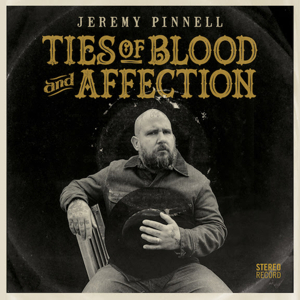 One verse into the opening track of the new Jeremy Pinnell album is enough to announce that this record is going to resonate. True to form, TIES OF BLOOD AND AFFECTION sticks to the rulebook, carrying on in a similar vein right up until the final track where the peak is scaled. This rulebook is straight down the middle-no frills country music undeterred from dipping into life’s darker side, often born out of the bars, dancehalls and honky tonks stretching across the land. This brand new nine-track album is the second release from a no doubt proud Northern Kentuckian, a location that is not shied away from being referred. This is a continuation of the previous record, which contained the simple State abbreviated title OH / KY. Maybe the geographical references do have some impact on a writer acknowledging the influence of their roots, but the stellar selling value of the record is Pinnell’s acute ability to capture the spiritual embodiment of country music.

Strong melodies primarily adorned with pedal steel and twangy guitar tumble out of a series of songs, sung with the earthy grit of a seasoned artist who has long moved on from first base. This is suitcase music channelling a performer forever on the move, if not literally, certainly from a mind-wandering perspective. The rhythmic undertones ensure it keeps its head above the mayhem of a crowded room, heaven forbid even possibly garnering some airplay. One certainty is that country music in its purest form will never die as long as artists like Jeremy Pinnell are plying their trade.

“Laid up in the house full of hookers and wine” is the corker of a line that opens the album in the track ‘Ballad of 1892’, one that is only eclipsed just over half an hour later when perhaps the standout track acts as the untimely closer. ‘The Way We See Heaven’ is the song to claim this mantle and is a glorious/inglorious take on religion dependent on your persuasion. The line combo “in nineteen hundred and seventy seven my mama thought I came from heaven…later in life she knew I came from hell” has not been touched all year in its instant impact. To complete the lyrical nous, things get a little risky in ‘Feel This Right’, with “son, we broke the bed when we made you” being proclaimed in the chorus of yet another song that truly is embedded in your mind – for the right reasons.

Elsewhere on the album, standards refuse to drop. When the rockers kick in such as ‘Ain’t Nothing Wrong’ and ‘I Don’t Believe’, they contain the ability to transport the listener from wherever they reside in the world to the mythical existence of living and breathing a country song. On the more temperate tracks such as the poignant ‘Different Kind of Love’, as well as the honest and frank standard ‘Best I Could Do’, Pinnell takes the listener in his confidence and rewards their attention with music to pin your hopes on.

‘Take the Wheel’ leads the final two tracks and holds most merit in the sumptuous musical interludes that piece together its verses and chorus. Likewise, some great music backs the seventies-style light rocker ‘I’m Alright With This’. Critically, all nine tracks play a part in making this record a riveting listen from start to finish.

For its UK launch, TIES OF BLOOD AND AFFECTION is getting a helping hand from At The Helm Records, though the release remains on SofaBurn. A few UK dates have been lined up alongside Ags Connolly, on the surface one of the more astute UK-US collaborations you are likely to see this year. Folks discovering Jeremy Pinnell, either through one of those shows or engaging with the new record, are in for a treat. Ultimately, this is country music that you can dance, drink and cry to. What more is required?