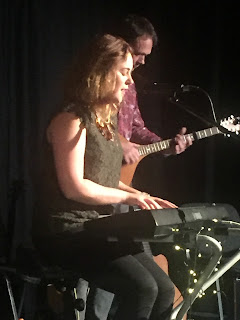 Two years ago, Stourbridge-based folk musician Kim Lowings stubbornly battled the ailments to get through the launch show of a new album. This time there was no uninvited obstacles as she both, hosted a memorable evening and glided through her own set. Thus presenting the whole of WILD & WICKED YOUTH in its crafted splendour. For the evening to celebrate the official release of this acclaimed album, the studio venue at Bromsgrove’s Artrix Arts centre proved the ideal setting. Friends, family, fans and fellow musicians flocked to the location from places near and far, all amply rewarded with a full evening of folk music in contrasting forms.

In order to give the faithful a music packed evening, two opening acts were invited to perform providing a near three hour feast, give or take the minimum changeover/refreshment breaks. Susie Dobson alongside guitarist Ant Miles played a low-key short set to get the evening underway. Her music was a gentle mix of traditional and cover songs with the latter featuring a version of Anais Mitchell’s ‘Why We Build the Wall’. Following Susie, the tempo was raised with the appearance of London Folk band Apples… I’m Home. Surely, the most curious band name to cross your path for a long time. Their extended set was characterised by a folk rock style, albeit wholly in the acoustic realm. They made a significant presence with a five-piece line-up and took the warm-up role to its limit by using the dynamics of their repertoire. 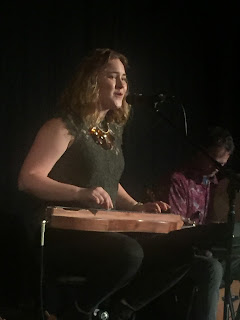 By now, the audience were ready for Kim to relinquish the MC role and take them on a journey to share the fruits of a third foray into recording a full-length album. Starting on the trademark dulcimer, Kim kicked off the set with ‘The Newry Highwayman’, a traditional tale housing the album’s title in one of its lines and acting as the initial promotional track. The audience was frequented by a few who had supported the album through the Pledge process alongside some others privileged to get a sneak preview. However, the bulk of the gathering got an exciting initial insight into the delights of this twelve-track record, even to the extent of learning about some of the more curious reviews.

The beauty of a launch gig is the opportunity for the artist to provide some background to the songs, whether the source of the selection or inspiration for the composition. This evening was no different, with particular tracks being heard in a fresh context from during the review process including ‘Oh the Wind and Rain’ and ‘In Spirit’. What was concretely confirmed was the utter beauty emanating from the two stunning ballads on the record, both getting the full piano treatment from Kim, precisely replicating the album version. The only differentiation between ‘Firestones’ and ‘Fly Away’ is the former just marginally pulling ahead in the preference stakes. 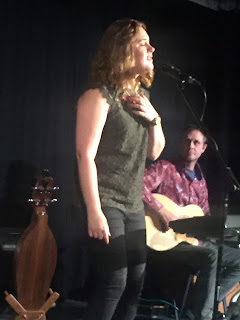 There was enough time to treat folks with three older songs: a neat combination of the original, cover and traditional song. All three are integral parts of the audience singalong opportunities leading off with the infectious ‘Maggie’s Song’, a firm favourite from the previous album HISTORIA. Kim has been covering the Be Good Tanyas’ song ‘Littlest Birds’ for a long time and this evening’s performance in the usual instrument-free vocalist role was just as good as hearing it when first discovering her four years ago. ‘The Begging Song’ has also been a staple fixture of a Kim Lowings and the Greenwood show and its encore role brought the evening to a rousing conclusion. ‘Away Ye Merry Lasses’ off the new album has been making valiant attempts to replace this traditional piece as the prime interactive moment, but upon reflection it still has ground to make up.

As usual, the Greenwood backing trio gave Kim stellar support, although for this launch show the trio became a quartet with the addition of Ben Moss on melodeon and fiddle. The use of the latter is one of the album’s redeeming instrumental features and while it only gets an occasional Greenwood outing, it played a grand part in the success of the show. The other Greenwood contribution was highlighted by the bouzouki playing of Andrew Lowings and Dave Sutherland’s double bass riffs on ‘Farewell My Love So Dear’, all soundly kept in rhythm by Tim Rogers’ cajon and assorted percussion playing.

By the end of the evening, there were few excuses for folks not to grab their copy of WILD & WICKED YOUTH and many others will get a previewed opportunity as Kim Lowings and the Greenwood undertake a series of tour dates around the country during the remainder of the year. For everyone else, the record is now available on a wide selection of platforms and wherever your preference lies, the merits of this distinguished album are boldly on display. By their nature, launch gigs are often portrayed as an unqualified success and this one proved no exception.