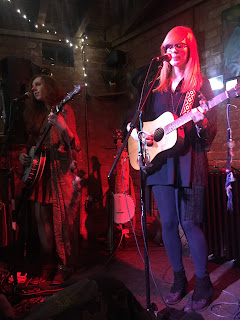 The pace is certainly picking up for London based duo Worry Dolls as they motor on through the midway point on their current 25-date run of UK shows. Such an extensive headline tour, and armed with a brand new album available in multiple formats, was only a pipe dream as they sought musical direction in their post-university years. In fact the last time they played the Kings Heath area of Birmingham, it was in support of Keston Cobblers Club. Subsequent belief in their ability to make music that resonates with an increasing audience has paid off and the opportunity was grabbed to see the fruits of their development during this Kitchen Garden Café show.

Worry Dolls is the performing moniker of Rosie Jones and Zoe Nicol; two artists sharing common values and discovering that timeless knack of harmony presentation. Musically the pair keeps it straightforward with predominately Zoe’s banjo and Rosie’s guitar providing a steady backdrop to a sweet sounding vocal output. The latter element probably courts the most appeal alongside a priceless ability to write a bunch of songs, rich in integrity while possessing a popular streak. Folk, country and Americana are labels that may help them seek structural audiences, but neither really defines Worry Dolls in the strictest sense. A broad individual stamp and the smart utilisation of innate talent enable the music to blossom creating an enormous potential to reach out far from traditional bases. 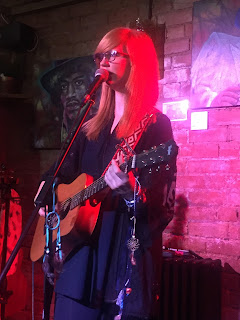 Across their two sets in this midweek Birmingham show, all featured songs were of original origin which is quite unusual from a wide sample of gigs seen. However when your song is such a valuable asset, why not use every inch of available canvas. A couple of earlier Worry Dolls EPs and the brand new album, only released last month and titled GO GET GONE, offered sufficient choice to fill the evening. Only on the penultimate track, the feisty ‘All I Got’, did a song not readily available appear. Indeed it is useful to finish a gig on a high and this number plus the encore selection ‘Train’s Leaving’ proved to be serious contenders for the show’s highlights.

When reviewing the album, the retro country pop sounding ‘Miss You Already’ was identified as one of the standout songs. This evening it acted as the set opener, which is not always the best position as often it takes a few numbers for the artists to get into their stride. Rosie and Zoe were definitely into theirs by the time they played ‘Bless Your Heart’, an excellent ear pleasing track already siphoned off as a single. At this point we began to learn about the Worry Dolls outside the songs, with the title of this piece being adopted from a put down greeting they learned in Nashville. In fact their time in Music City was the location where they recorded the album under the esteemed stewardship of Neilson Hubbard. 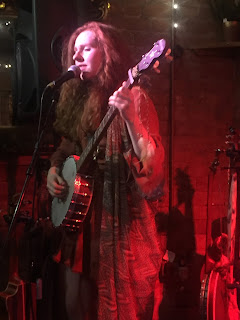 Apart from Worry Dolls overseas excursions, another preferred element of inter-song chat was a short introduction to most of the songs including inspirations and topics. These included ‘Passport’, ‘Things Always Work Out’ and ‘Drive’. The audience were also briefed on a couple of artists who they have worked with. One co-incidentally being Ben Glover, who had only just played this venue the previous night and had co-written ‘Light Oh Light’ for the new record.

Another song that came across well was ‘She Don’t Live Here’, despite Rosie not having access to a piano which graces the recorded version. The review indicated the essence of this song to being a similar sound to Canadian folk stars Madison Violet; a viewpoint that remains after listening to the live version.

No doubt there will be plenty of other opportunities to catch Worry Dolls on the circuit as the year rolls out. Some of these may have the good fortune of a full band in tow complete with pedal steel. In the meantime Rosie and Zoe have the raw tools to take their songs far and wide. The unassuming style, precisely pitched vocals and accessible song melodies will not be short of admirers. The Kitchen Garden Café is used to distinguished artists passing through and Worry Dolls didn’t disappoint.