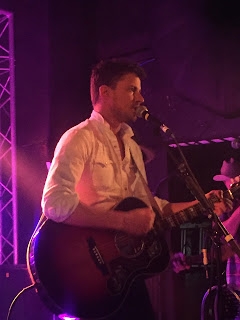 They came from west of the Mississippi where the music starts to get as rugged as the impending landscape and a little more outlaw in outlook. To be more precise, Oklahoma is the home state of the Turnpike Troubadours, but for one evening only the roaming nature of their surname landed in the hull of a ship in the west of England. This six piece outfit have no doubt played many interesting venues in their decade-long existence. Now they can add the Thekla, surely not just one of Bristol’s quirkiest venues but that of the whole UK, to a comprehensive list of places to reverberate to their raucous sound.

By stretching the increasingly common weekend 10 PM live music curfew to it absolute limit, Evan Felker and his merry band of compulsive rockers ensured the Turnpike Troubadours lived up to every ounce of their projected proclamation as a treasured live act. Whatever follows these music curfews up and down the land, it cannot come close to what early bird revellers experience when bands like this hit town.

An encouragingly impressive turnout greeted the headliners who have the stage drive and passion to convert a rare European excursion into a regular part of their touring empire. Mixing country music in its purest form with the raw energy of punk propels the Turnpike Troubadours into a powerful live outfit, ready to blast any venue with the glorious edge of a rough diamond. For a riveting ninety minutes, the holy rocking sextet of fiddle, steel, bass, lead, acoustic and drums drove song after song to a multitude of differing beats and accelerator settings, all in the true style of American roots. 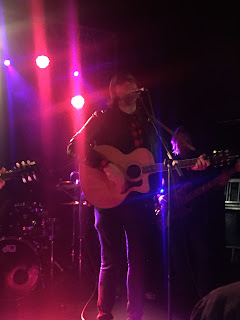 Prior to the touring boys strutting the stuff, early arrivals were greeted by some home grown talent in the shape of the Robert Vincent Band. Armed with songs from his brand new album, Robert has grasped the opportunity to support Evan and the guys on these UK dates and provides the perfect foil. Operating at a pace a few notches down from the Turnpike Troubadours, little time was wasted in delivering a selection of the new songs. These were from more of a traditional rock angle tinged with a sensibility that takes the sound into introspective territory. There is an obvious transatlantic influence that puts Robert into the mist of Americana, while feel free to challenge the sad song agenda at your peril.

The full band format gives Robert’s songs a more rounded live airing which suits efforts such as ‘So in Love’, ‘November’ and ‘Dancing with Devils’. Those familiar with his music will no doubt be aware of his signature song ‘Demons’, the usual set closer and sounding just as good this evening as the previous time he was caught live in this format, at Maverick Festival last July.

There was an enhanced buzz around the ship when the headliners appeared especially among an enthusiastic gathering at the front of the stage ready to embrace each note and word from their favourites. The range of material was evenly distributed between the latest three studio albums including the self-titled one released to critical acclaim in 2015. One of the prime songs from that record also excelled in the live arena with the line ‘you can have a nickel out of my last dime’ heralding a smile each time you listen to ‘Down Here’. 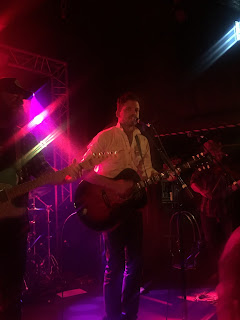 Going back an album further, ‘Gun, Smoke’ Lies’ was probably the pick from 2012’s GOODBYE NORMAL STREET with other songs like ‘Morgan Street’ and ‘Blue Star’ featuring early in the set as the band were hitting their straps. While the word ‘loud’ was a representative feature, pedal steel and fiddle had sufficient space to prosper. The fixated and absorbing presence of Evan Felker as lead vocalist and band focal point grew as the show progressed. The results were exceptional when he commandeered the solo spotlight on the odd moment, with ‘Diamonds and Gasoline’ proving a show highlight. This was the title track of the band’s 2010 album with ‘1968’ and a version of ‘Long Hot Summer’s Day’ lifted from that record proving vociferous crowd pleasers. On another occasion where the band explored the song writing world of others, bassist R.C. Edwards took over lead vocals to sing a song introduced as ‘one taught in Oklahoma kindergartens without the communist bits’. The relevance of ‘This Land is Your Land’ rises with each passing day of 2017.

Up to now, getting into the Turnpike Troubadours has been largely through their recorded material, but this appreciation has doubled with the live exposure. There may have even been a number of casual converts through this UK tour who took a gamble on the band’s reputation and were handsomely paid back. For these and seasoned fans alike, they all witnessed a full on display of raucous outlaw country music, held together by a strong song writing spine and blossoming in an ideal Friday night setting. Long may the Turnpike Troubadours keep the UK on their tour horizon.