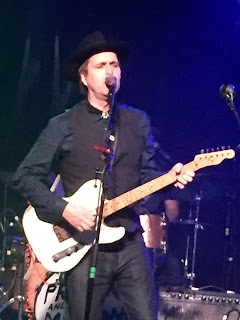 When Chuck Prophet is on a mission, what you see is one of the most enigmatic purveyors of alt-country rock ‘n’ roll music on the circuit today. Of course Chuck has been producing the goods for over thirty years through his Green on Red connection and solo work. On the evidence of these latest set of UK dates, the Californian is still firing on all cylinders and an enthralled Nottingham crowd soaked up a whole two hours of vintage Chuck Prophet and the Mission Express.

Although vintage in style, the material leaned heavily upon the absolute contemporary with the brand new album featuring prominently. BOBBY FULLER DIED FOR YOUR SINS is barely a week old and yet its status as a cultural high spot for poetic rock ‘n’ roll is securing tightly with each play. Chuck and his band launched their set with the title track of this album just after eight thirty and the marker was set for a riveting couple of hours of prime sophisticated velocity. The Bobby Fuller connection didn’t just lie with the opening track as the encore began with a cover of ‘Let Her Dance’, a popular hit for Bobby before his sad early demise in the mid-sixties. By that time, the entrance fee had been repaid several times over with Chuck in absorbing form and in total control of an engrossed audience.

Each song, whether crowd pleasing old favourites like ‘Temple Beautiful’, ‘You Did’ and ‘Willie Mays Is Up At Bat’ or new material such as ‘Bad Year for Rock ‘n’ Roll’, was perfectly accompanied by the four band members. It was the usual set up with the lead guitar of James DePrato and keyboard of Stephanie Finch stepping more to the fore leaving Vincente Rodriguez (drums) and Kevin White (bass) to shore up the backfield. The former pair also added vital harmony contributions ensuring that there will always be a West Coast feel to the music of Chuck Prophet.

Several spins of the new record reveal another song writing lyrical masterclass from Chuck. Two particular stand-outs from this album were ‘Jesus Was a Social Drinker’ and ‘We Got Up and Played’. Both saw Chuck switch into acoustic mode with the utilisation of his Martin D-38 prompting an ironic cry of Judas from the audience much to his amusement.

It is 2017, so the inevitable and essential political comment from the progressive American artistic community ensued, with ‘Barely Exist’ being dedicated to those seeking a better life. Also much of that community is still coming to terms with the losses of 2016 and Chuck delivered a duet version of ‘Iodine’ with Stephanie as a tribute to Leonard Cohen. This was a gig awash with an abundance of seriously good moments, so you could take your pick from the pin drop sublime to the fully fledged onslaught of electric amplification. Even the latter contains marvellous content as exemplified by ‘Alex Nieto’ off the new record.

The Rescue Rooms proved the ideal hosting pad for Chuck. A sizeable gathering was comfortably housed and the enjoyment of the music was enhanced by finding the venue’s sound sweet spot. Likewise Chuck found his all night. By the time the band signed off with the popular ‘You and Me Baby (Holding On)’, a perfect resting place in the personal gig memory vault had been created making this one of the standard markers for at least the rest of the year – probably longer.

The bill was enhanced through a short opening set from an American folk singer by the name of Max Gomez who is travelling with Chuck. An engaging song about an antiques store and insurance fraud proved the highlight of his set and Max made a re-appearance for Chuck’s encore. The whole set up on stage proved a resounding success for Nottingham based promoters Cosmic American who have a long association with Chuck. Maybe their forays into Birmingham for his gigs didn’t reach the same level but a short drive up the M42 for West Midlands based folks was a small price to pay for a night like this.

Long may Chuck Prophet’s lengthy association with touring the UK remain and even if there is not a universal appreciation of America’s favourite past time, a few of us understand the psyche of ‘three on, two out and the Giants greatest ever centre fielder'.