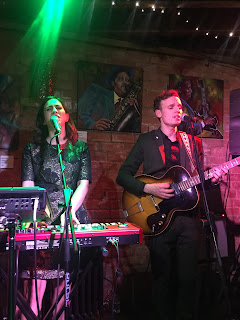 Literally a few days after one transatlantic music event in Birmingham finished, another took place on a much smaller scale with this evening’s gig at the Kitchen Garden Café. Only last Thursday the city’s Symphony Hall duly hosted a fine bunch of musicians spanning the breadth of the British Isles and the United States. This evening it was the turn of Mississippi native Alva Leigh and Welshman Al Lewis to cement the special relationship with a musical presentation in the guise of their award winning duo act, Lewis & Leigh.

The other link between this evening’s sold out gig and the Symphony Hall was the latter’s role in boosting the duo’s profile in the city when they supported Deacon Blue there a couple of months ago. Without doubt a few folks were inspired to attend on the evidence from that evening, while further impetus was gained when news spread of their double award win at the recent UK Americana celebration. One of these accolades was for their debut full length album and the entirety of GHOST had a full airing during this show which formed part of a current UK tour.

Prior to Lewis & Leigh taking their place in the spotlight, local singer-songwriter Chris Cleverley grasped another opportunity to raise his status as one of the region’s emerging folk artists. He played an engrossing extended opening set sharing an ingrained passion for music of a considerable depth. A range of songs covering the traditional, cover, new arrangement and original angles kept an attentive audience transfixed, aided and abetted by an intrinsic finger picking style. The intensity only occasionally dipped, mainly with an entertaining tale of failed debauchery, but it was amongst these tense moments where the set peaked with the song ‘But Thinking Makes It So’. This was a result of Chris’s involvement with the Company of Players project, established to honour the recent Shakespeare anniversary. The song was inspired by the Bard’s take on mental health and whets the appetite for what other songs came out of this project to view England’s literary heritage through the eyes, ears and minds of a bunch of this country’s brightest young folk music talent.

While it is relatively straightforward to capture the style of Chris, Lewis & Leigh tend to be a little introspective in the way they project their music. The most redeeming feature is the vocal harmony and the way both voices interchange within the song. This initially came to prominence in ‘What is There To Do’, credited now as the first Lewis & Leigh song and to be found on their inaugural EP recording NIGHT DRIVES. We were reminded that the third anniversary of Lewis & Leigh as an official duo had just passed and it has definitely been an upwardly mobile trajectory of accrued praise for the pair.

Musically, via Alva’s keyboards and Al’s guitar, the sound adopts a low key approach with only a fractional deviation into upbeat territory. Even a cover of The Smiths’ classic album track ‘There is a Light That Never Goes Out’ gets the first gear treatment. Ironically the opening phrase of this song title was lifted for the lead off track from the new album, with ‘There is a Light’ and its follow up piece ‘Rubble’ neatly fitting into the early stages of the set. These proved to be highlights of a time on stage that just edged over the hour mark.

Throughout the performance, the Kitchen Garden audience was in their usual impeccable listening mode; an essential state to enjoy the essence of Lewis & Leigh. This environment of placidity was kept intact right up to the point when the evening was signed off with ‘The 4:19’, fast becoming the duo’s signature song, more so in the light of its recently acquired award winning status.

There is an element of simplistic sophistication around the sound of Lewis & Leigh which suggests the duo have a keen ear on making songs with the potential to possess an ever widening appeal. This will continue to serve them well as emerging opportunities to advance their career will inevitably appear. A sold out Birmingham audience fully appreciated the talent on show and the fit between artist and venue would be tough to better with many other combinations.