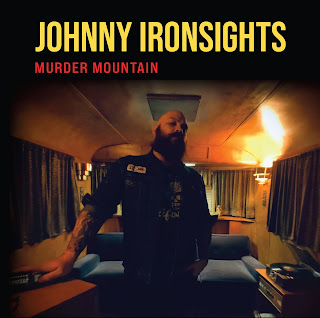 'No-one really gives a damn what we do on Murder Mountain' blasts Johnny Ironsights in an angry mood after a thirty-second twang fuelled introduction, thus setting the scene for what to expect from an album bound together by the power of punk and the substance of haunting pedal steel-driven alt-country. There is a mean and harsh streak from that stark opening to the point where the curtain is drawn to 'When I'm Gone, When I'm Dead'. In between Arizona-based Johnny Ironsights stumbles a few hundred miles west to his California roots to piece together a dip into some dark extremities of both place and mind. What unravels is a moving spin of hardened tunes that puts the emphasis on alternative, and pounds a slice of up front-in yer face impact.

MURDER MOUNTAIN is as distinct a record as you are likely to hear decked with some sort of Americana pretence. Not that Ironsights is likely to concern him himself too much about fitting into neat little boxes. With an album and title track named after a place in northern California that operates outside the mainstream to put it mildly, likewise the music, themes and presence within the ten tracks presented here wander into inimitable circles. Yet there is a compulsive essence to lure you into the volley of musings, thoughts and candid explorations. This is an album stamped with an intriguing licence to delve into the music of Johnny Ironsights and emphasises the point that sometimes you just have to dive in head first and not dilly dally around the edges. Interesting - yes, enthralling - yes, blasts a deep crevice into an Americana scorched earth- definitely. Over to you to discover.