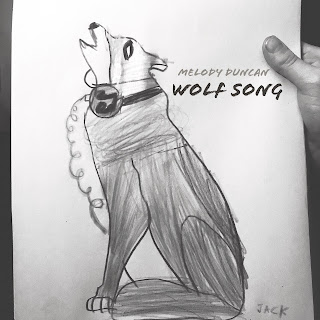 Talented and accomplished musician Melody Duncan opens up a new chapter to her career with the release of a debut album. Prior to WOLF SONG demonstrating a smart movement from supporting player to spotlight performer, this Atlanta-based artist born and raised in Mobile Alabama toured far and wide adding violin/fiddle/keyboards and vocals to The Mulligan Brothers, an act frequently rubbing shoulders with the stars of the Americana world. Now there is no hiding place. It's just Melody Duncan exposed to all the elements armed with a distinctive voice, plenty of song writing acumen and a crafted musicianship to cut a niche in a highly competitive field.

Eleven tracks are plastered across the sleeve of this album, though you can deduct two for analysis in the shape of a 20-second violin led prelude kicking things off and the literal recording of a 'Rain Storm' closing things out just over half an hour later. The slight quirkiness of the finale is demonstrative of a creative approach to recording that frequently judders into eclectic moments leaving the listener beguiled and mesmerised.

A self-confessed wolf obsessive, Duncan draws on the communicative facet of her fascination to enhance the sound and regularly adds interpretative whistling to the lashings of orchestral violin that all contribute to a raw chamber folk and roots fabric. It is the voice that ultimately snares the listener, one a little hoarse, cracked and croaked in places but never short of its own pervasive beauty. A touch of Brandi Carlile was detected at the end of 'Reunion', but it is a perceived likeness to Anais Mitchell that constantly nags the mind. However music can lead wherever your ears wish to take it.

Of the nine self-penned songs presented for your aural pleasure, the three standout numbers in my book are the title track 'Wolf Song' splendidly springing into life after the prelude, the delightful 'Cardinal' awash with intrigue and the killer chorus-strong 'Over the Hill' dropping anchor in the album's heart. Maybe it's the tracks with the most prominent melody and striking chorus that linger long, but that's not saying there isn't plenty to absorb and enjoy from the remainder of the album.

Going solo has proved a wise move for Melody Duncan and the endeavours to plow an independent path on all fronts from writing, performing, recording to producing has reaped dividends on an album that blossoms to adjusted ears. WOLF SONG is a highly creative body of work that draws influence from multiple sources for a talented artist to put them through the mangle and produce something captivating  and utterly alluring. A debut album to savour and spin repeatedly when you desire to stretch your listening repertoire a little.