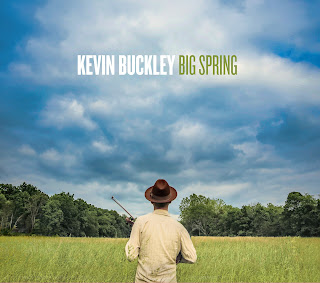 The latest in a long line of albums getting a European release to co-exist alongside an earlier Stateside one is BIG SPRING by St.Louis-based multi music operator Kevin Buckley. To describe this dozen-strong offering as a fiddle feast pretty much hits the target, and if you are partial to this most pan-continental of instruments, then there are plenty of styles on offer to enjoy. Swing, bluegrass and traditional Irish folk music see Buckley expanding his repertoire on an album that truly feasts on a desire to frame a long standing passion.

This is actually a debut solo release for a hugely experienced exponent of roots music and beyond. Band involvement and producing filled a lot of the time previously, but stepping out up front with a minimalist set up has shone a light on a raw talent. This has been mainly in the role of interpreting traditional tunes. It doesn't take a deep understanding of genre fiddle styles to detect the switch. Close you eyes and it is easy to imagine being either in a European concert hall, an Irish pub or a dusty old rural shack as the album skips across the terrain.

Three songs pop up to give the instrumentals a break. Two are traditional in the shape of 'Miss Bailey' and 'The Blackest Crow', while a cover of Andy Irvine's tribute to Woody Guthries 'Never Tire of the Road' is a third opportunity for Buckley to flex his vocal chops. This last song is the only track where the fiddle is laid down to rest.

Buckley's ability to compose his own tune occurs in the early stages with 'Ryder's Block'. A couple of tunes are borrowed from known sources such as the swing influenced cover 'Marcelle et Marcel'. A handful of numbers celebrating the inspiration of the Emerald Isle particularly crop up in the latter stages with 'The Belle of St.Louis' and a fervent finale feature in 'Ships are Sailing' leading the way,

Finding a place in a congested fiddle market can be a tough ask. Kevin Buckley shows that he can compete admirably amongst his peers relying on an ingrained and cultivated talent alongside a smart selection of tunes and assorted breaks. BIG SPRING launches a new era and may well just be the catalyst to some positive expansion. Regardless of where this leads, the here and now has been suitably graced with a record inducing a smile and drawing immense pleasure from.