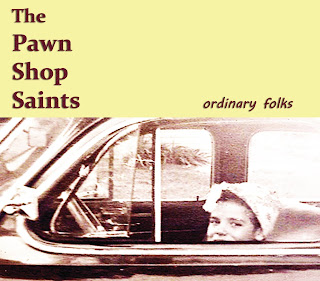 Releasing an album two weeks before Christmas runs the risk of being buried in the avalanche of end of year lists with folks generally in a reflective mood. Perhaps this unassuming release is just content to sit quietly peering from the sidelines very much in line with the image on the front cover and pounce when the dust settles. ordinary folks is not one to punch above its weight, even the omission of capitalisation suggests a far from bombastic approach. Just like it says on the tin, this is a gaze into a mundane world of well, just ordinary folks, and the world of simple truth and reality that brings out the best in a certain mindset of observational troubadour. Singer-songwriter Jeb Barry has dropped his name from the title of this album and gone solely with The Pawn Shop Saints. Whatever the motive he delivers a decisive slab of acute perceptive songwriting wrapped in a sound that echoes the curiosity of a southern road trip.

Long before the term 'reality tv' took root, the phrase 'fly on the wall' decorated a peer into everyday life and Barry succinctly carries this out as we gaze into the lives of many ordinary folk - yep that title is really appropriate. These lives range from those pitched up on the side of the interstate in 'Southern Mansions' where stripping away layers of prejudice reveals a hidden friendly warmth to an interesting take on a single person's experience of having their smoking habit demonised in 'Pack a Day'.

You can have no finer association than attaching the name Jason Isbell to the track 'New Year's Eve, Somewhere in the Midwest'.  Apparently Isbell threw the line out for somebody to turn into a song a few years ago. Barry obliged, Isbell approved and the result is one of your quintessential 'at wits end' stories that probably acts as a catalyst to redemption.

The term 'state of mind' crops up a lot in American roots music and Barry uses it to intuitive success in album opener 'You Don't Know the Cumberland'.  He refers to the mines not coming back in this track before using the reference again a little later when addressing the affect of floods in 'Body in the River'. There is definitely some affinity to coal mining and the roots music of Appalachia, even in casual remarks.

Throughout a record that succinctly fires its arrows right on the mark within the tight confines of a nine-track/thirty-minute template, Barry delivers a profound message in a deliberating style. Consistency matches quality and the words are stark, clear and thoroughly engaging.

Elsewhere on ordinary folks, the poignancy of loss is painted exquisitely on 'Old Men, New Trucks' and while the nostalgia of 'Lynyrd Skynyrd' is self evident, you could replace it with any formative teenage musical infatuation. 'Ain't No Mama Here' will have its day, but maybe later on, and the friendly warmth radiating from 'Dry River Song' is an ideal closer sung in a cosy campfire style of cowboy folk.

Smart folks may wallow in their end of year lists, but smarter folks will clear a little space for The Pawn Shop Saints. Ordinary folks beware though if Jeb Barry peers through the lens into your life a damn good song will likely appear.