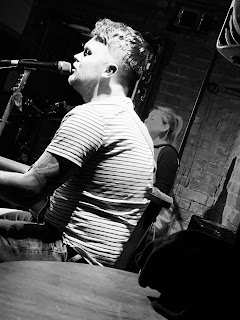 You could sense from the reaction at this show that the union of Ruth Notman and Sam Kelly has gone down well in the folk world. Maybe there is an aspect of curiosity surrounding Ruth Notman’s return to the front line, while the popularity of the ever-busy Sam Kelly continues to grow. This gig at the Kitchen Garden in Birmingham was one of the early dates on a tour organised to promote the duo’s new album that hit the shelves in March. It is always wise practice to get out and about when you have a new record. Not just to boost the sales, but provide a different perspective to those already acquainted with its content. Therefore, the sharing of CHANGEABLE HEART in its entirety was of little surprise, whilst wholeheartedly demonstrating what a talented pair of artists we have in our midst.

A recurring theme on the evening was Ruth’s medical career exploits; the main reason she has been absent from the music scene for a considerable period. A complimentary audience quip remarking on her multi talents sprang out as she eased from piano to guitar to accordion, all accomplished to supplement a vocal style that blends a touch of classical folk with an East Midlands brogue. In contrast, Sam concentrated on his pair of guitars alongside fronting the duo from the perspective of promoting and presenting the fruits of their collaboration. 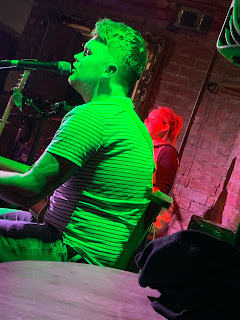 From a standard format of a pair of forty-five minute sets, the duo covered numerous folk bases including shanties, bawdy traditional numbers and originals ordained with a touch of splendour. On the latter front, it was clear that Ruth is more of a lyricist, as opposed to Sam erring more on the arrangement side of reviving old tunes. This is born out on their previous work and carried through to the new album. The standout song on it, the title track ‘Changeable Heart’, had a co-write credit, although it was introduced as starting life in Ruth’s locker. Its eventual leaning in a pop direction remains alone, both on the album and what else the pair delivered during this show, but a distinguished charm is retained and it stood up as well live as flourishing on the record.

‘Bold Fisherman’ and ‘Sweet Lass of Richmond Hill’ could be classed as best of the rest in what came over live. Although, the reproduction of ‘School Days’ and ‘The Island’ in the last two slots of both the album and the pre-encore set list stacked up well, with the former getting a haunting rendition from Ruth as she linked her Mansfield roots to this Ewan McColl mining ‘coming of age’ piece.

Of the five set list songs not on the album, delving into Ruth’s back catalogue formed the majority, but a rousing rendition of ‘Billy O’Shea’ mostly lifted the spirits. A song last heard on a Birmingham stage when conducted by John Doyle at the recent McCusker, McGoldrick and Doyle show.

Whether the collaboration between Ruth Notman and Sam Kelly settles as a one off, the success in terms of acclaim and appeal is rewarding the investment and faith built into it. Not least, the backing the pair had from Kate Rusby and Damien O’Kane. The audience, the artists and the ambience aligned perfectly once again at the Kitchen Garden and an engaging display of talent ensured the planned evening was expertly executed.

Review of Changeable Heart
Posted by David at 22:27