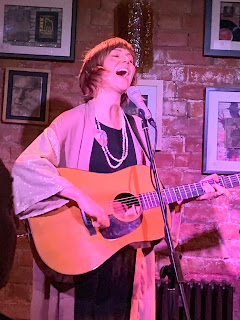 From the Grand Ole Opry to the Kitchen Garden Café in the space of days, not a journey you hear mentioned too often. On certainty, is that the performance Molly Tuttle gave in Nashville last weekend would have been something special to match the impact of this Birmingham gig to open her UK tour.  Buzz around this virtuoso singer, songwriter and most strikingly, an incredible guitar player has grown significantly in recent times. The long awaited debut full album release finally put the flesh on the bones of a promise given a major lift when the American Music Association crowned her their musician of the year last September. Of course, folks in Birmingham have long switched on after packing a nearby venue fifteen months ago to see an exceptional Molly Tuttle-Rachel Baiman show, and getting a brief glimpse of Molly in February this year when she joined the Transatlantic Sessions annual tour stop off in the city. Tonight though, was all about Molly Tuttle on her own for a full-on seventy minutes, and a blistering display of brilliant pickin’ music that passes through only occasionally.

Molly Tuttle graced the performing area in the packed venue (selling out in record time) around nine o’clock following an enjoyable and entertaining set from Norwegian singer-songwriter Ole Kirkeng. It did not take too long to ascertain the influence and inspiration for this artist, compounded when announcing a life split between Oslo and New York City. Taking a lead from the folk revivalists, he proceeded to turn his hand to a selection of decently crafted acoustic songs. ‘Rocking Chair’ was probably the pick of a bunch that found their groove early on then refusing to budge. A cover of Jackson C. Frank’s ‘Blues Run the Game’ lifted him out of his comfort zone thus adding a touch of diversity to a specific sound he nailed from the off.

Covers from the greats (three for the record) played a part in Molly’s set too as she toed the party line of honouring the legends.  It was not just the fact that ‘Gentle On My Mind’, ‘White Freightliner Blues’ and Neil Young ‘s ‘Helpless’ were played (they have many, many times before), but that they were given the Molly Tuttle treatment, and a breathtaking piece of guitar picking to lift the songs into the upper echelons of their many versions.

While the covers played a small but distinguished part, the blending of evolving song writing, adept vocals and obvious ‘A’ grade guitar playing will project the star of Molly Tuttle. The brand new album, titled WHEN YOU’RE READY, bulges to the hilt with original compositions and the audience had the pleasure of listening to a majority of them live. It was hard to look past album opener ‘Million Miles’ as the standout song on the evening, with further light shone by explaining how it began life as an unfinished Jewell-Steve Poltz number before Molly added the final touch. 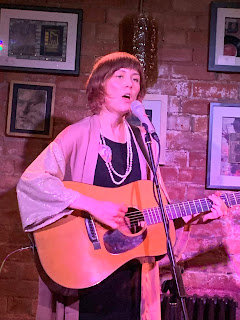 Other tracks such as ‘Sleepwalking’, ‘Take the Journey’ and ‘Light Came In (Power Went Out)’ represented the new album with distinction. This maybe is an album that entered the world wrapped in curiosity as the production steered it away from being a wholehearted traditional record to one where the term ‘contemporary roots’ plays a defining role. During this live show, you could detect the moments on songs when Molly toned down the intense claw hammer picking, likely to replicate when other instrumentation kicks in on the studio versions. However, the poise, class and owning the moment ensured that each of the songs were dealt in a state of ultimate control.

Outside the new record and astute covers, Molly’s 2017 EP RISE made a couple of set list appearances, notably from ‘Good Enough’ and a Kirby Lenker co-write ‘Friend and a Friend’. You only need to read briefly about Molly to decipher the circles she mixes in Nashville and this bout of collaboration obviously wears off.

From an artist breaking barriers down in her bluegrass roots to one who can seriously make waves in the wider world of country and Americana, Molly Tuttle is a heck of a talent and it was a humble privilege to witness her in our small humble abode. Many outstanding evenings have been spent in the Kitchen Garden over the last decade, but few come close to matching this event. One to warm the cockles of any American roots fan’s heart.