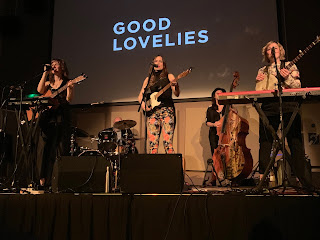 April is a month with a spring in its step and a perfect analogy for Canadian trio Good Lovelies currently right at the heart of their latest UK tour. A first ever visit to Bewdley Worcestershire (not to be confused with Bewdley Ontario) turned out to be a night of the familiar and the unfamiliar on a couple of footings. Despite a detected studio shift with the latest record, this evening’s performance by Susan Passmore, Caroline Brooks and Kerri Ough possessed all the gilded appeal that first drew attention to this trio when their music started to drift overseas. Some aspects of the Good Lovelies will never change and the status quo enriches rather than stagnates. A recent review of the new album concluded with ‘oh and those harmonies never cease to amaze’; a point nailed further to the ground after spending another ninety minutes in the musical company of the band.

The unfamiliarity mooted earlier links to this Music in the Hall presentation. A break was taken from providing a showcase for youth and local artists to enable the evening’s support to come from another Canadian act, a duo titled Fortunate Ones. They are currently accompanying Good Lovelies on this tour and re-enact the old warm up role to a tee. Maybe there was a slight gap on the evening from the usual menu; a concept and policy that embeds these nights as community events and likely to be a factor in the exceptionally large turnouts filling St. George’s Hall on a monthly basis.

It was mission accomplished after the opening set. Fortunate Ones explicitly presented who they are through their music and forthright chat. Descriptions leaning them in a folk-pop direction were not too far adrift and they came across on first listen as a duo adept at cutting a decent tune. Songs from their album HOLD FAST, including the title track and ‘Steady as She Goes’, formed a short set. The latter encouraged a bout of early audience participation. Without doubt, future Music in the Hall presentations will revert to the usual formula. While Fortunate Ones added to the zest of the evening, there was a little something missing, further compounded by the enhanced quality in the youth and local acts witnessed this year.

Although Good Lovelies have been seen several times live over the years, this was a first in a five-piece set up with the regular MJ Dandeneau joining on upright bass and a new addition in Mark Mariash on drums. He was introduced as playing with the band since early 2018, which fitted in with last seeing them play Birmingham in October 2017.

Across a set that expanded to twenty songs, the band played a cross section of material reflecting their decade of recording music. Early on, it was announced that this tour was in effect promoting two albums, BURN THE PLAN and SHAPESHIFTERS, and songs from these more than powered half the set. The latter proved an album that needed a bit of time to grasp, though the seamless thread tonight would have suggested otherwise to virgin ears. Conclusions from SHAPESHIFTERS hailed ‘When You’re Young’ has the top track, but it had to settle behind the impressive ‘Pulse and Flatline’ and the infectious ‘I See Gold’ in this absolute unfiltered setting. 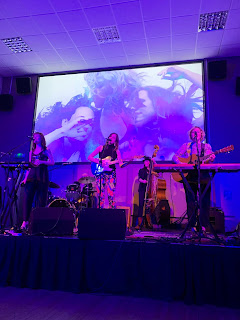 The pick from BURN THE PLAN had to be ‘Old Fashioned Love’ (another invite for all to sing), closely followed by ‘The Doe’. This last piece opened a two-song segment when Susan, Caroline and Kerri unplugged, re-assembled in front of the stage and gave the most wonderful, harmonious performance. Caroline led on the first (one of her compositions) and Kerri on a version of the Crosby, Stills and Nash number ‘This Old House’, both magical moments.

Vintage Good Lovelies cropped up on a couple of occasions. First in a pairing of ‘Best I Know’ and ‘Heebie Jeebies’, peaking in a rousing version of 'Lie Down' and a crowning encore rendition of ‘Crabbuckit’. Like many songs during the set, stories interweaved with a heavy bias towards the touring travails of three people leaving their loved ones behind during long days on the road. Family has never been too far from the agenda when it comes to the Good Lovelies, and sharing this part of their lives probably acts as a coping strategy for missing them when on tour.

There was so much admiration to take away from this Good Lovelies show. Inspiration, positivity and vitality were upfront, and for once, it was a pleasant change to leave the sad songs and misery on the shelf this Friday evening. After grappling a little with SHAPESHIFTERS, this wonderful performance from a band championed here for a long time acted as a reassuring reminder that what we love about them never goes away. Yes, those harmonies still never cease to amaze.