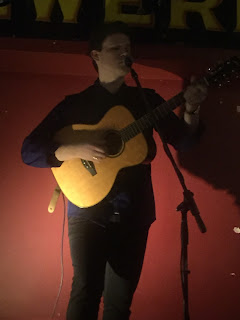 The second gig of the year proved a somewhat low-key affair, as Amy Wadge had to pull out of her nationwide duet tour with Luke Jackson at the last moment. Not one to sit in his Canterbury flat twiddling his thumbs, Luke decided to fulfil a number of these dates in solo mode, with the audience obviously notified of the change. Following a trip to the North West, the Birmingham date in the upstairs room of the city centre located Cherry Reds was an ideal stopping off point for this hastily rearranged format. Luke has frequently visited the Midlands area for shows in the past, including one at the Hare and Hounds when he toured with Amy in 2015. Just six months previously, the talent of this folk-blues singer-songwriter first alerted me via a gig at the Artrix in Bromsgrove. To this date, a casual eye has been kept on a promising career that now goes back quite a few years for one seemingly so young.

During the two sets that Luke intimately delivered to a small gathering, you got a good flavour of his prime asset, a vocal style that conjures up a real depth of feeling and breadth. Upon first hearing Luke sing live, one could not help thinking what the effect on him could be if he spent an extended period in the Delta, living and breathing the story of the blues. What then would be unleashed on the UK scene is favourably imaginable. Maybe not quite the Deep South, but Luke does get to travel across the ocean and during this evening, he spoke of a recent song-writing excursion to Canada. Anyway, wherever Luke takes his career, the raw ingredients will successfully fuel the outcome.

This run of dates may be curtailed, but we know Luke will be back and he appears to be a firm fixture on the UK acoustic gig scene in some format or another. To add to his growing catalogue of releases, he previewed a brand new live album due out very shortly and added that further studio material is not too far behind. This evening’s sets were a fun balance of popular covers and songs of his making, of which the latter were totally owned by the voice. The best of these was undoubtedly saved to last with the chorus of ‘On The Road’ being the absolute definition of where Luke Jackson is as a performing artist in 2017. The queue of admirers is only going to get longer.