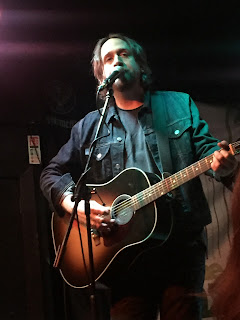 Where January tumbles into February:  the time of year when the Celtic Connections deepening funds keeps Glasgow Americana folks warm and the London centric world feasts on a glut of touring artists. Yet keeping the spirit of the provinces glowing was a sold out gathering in the back room of an East Midlands pub, and a Texas singer-songwriter of the highest pedigree spilling out his poetic soul. The first good news is that Hayes Carll has consigned to history any indifference to touring the UK. Following this, is the first hand report that he has never sounded better, with the added bonus of new material taking shape. While his previous touring companions have often played a significant part in past shows, there was no diminishment of a solo Hayes Carll dominating the stage. Perhaps, the intense focus further contributed to the success of the gig.

Midway through the set, Hayes segued two of his finest songs, bridged only by the assertion that his good friend Ray Wylie Hubbard once commented that the problem with irony is that not everyone gets it. Few in this informed Nottingham audience would have failed to grasp the irony of ‘She Left Me for Jesus’ and even fewer not suitably moved by its predecessor, the magnificent ‘Beaumont’ and a prime example of the Hayes Carll ‘A’ game. The guitar riffs accompanying this classic tale of South Texas missed love are purely mesmeric and a major reason for any live airing being a golden gig moment.

Although far from a prolific studio artist (only four albums in the locker since 2005), we were treated to four new songs, which will make their way into the recorded world in good time. The only sneak preview we will allow is – think of Hayes at his best and you are in the right territory. It would be wrong to say that these trumped the familiar material because classic penned tunes like ‘Bad Liver and a Broken Heart’, ‘Sake of the Song’ and ‘Wish I Hadn’t Stayed So Long’ have certainly set a high barrier for its successors to follow. However, this is not a challenge that Hayes has found insurmountable in the past.

Themes of lamented encounters; trails of hope and regret, and an acute ability to tap into life’s poignant moments are littered across his material. However, there was still a reminder of external success including the Grammy nominated ‘Chances Are’ (courtesy of Lee Ann Womack) and Kenny Chesney giving a mainstream country sheen to the heart breaking tale in ‘Jesus and Elvis’. 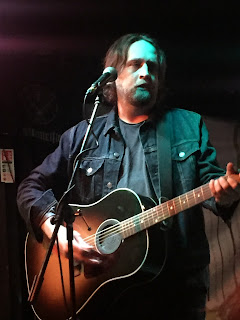 The atmosphere was given a tempo boost as the finale approached with faultless performances of ‘Kmag Yoyo’ and ‘Stomp and Holler’. Surprisingly, the songs from the most recent album, 2016’s LOVERS AND LEAVERS, were generally sparse on the the ground with ‘Good While it Lasted’ being one of its occasional dips into. No surprisingly, probably the finest of the four releases in TROUBLE IN MIND proved popular pickings. ‘Wild as Turkey’ from this album opened the show; the ever-excellent Ray Wylie Hubbard co-penned ‘Drunken Poet’s Dream’ sounded  its usual supreme self and ‘I Got a Gig’ had its usual story attached, but this time post rather than pre-song. This last piece harks back to early days as a fledgling performing songwriter in Crystal Beach Texas. While the lion escapade was missed out, we had an extended gambit on the offers made to lure back lost punters, though the success of '25¢ chicken wings and Hayes Carll' was not exactly established.

The hour and half spent on stage this evening was a priceless exhibition. The aura generated; songs savoured and tuneful picking from his trusted stringed accomplice kept the audience enthralled. Unfortunately, Nottingham was solely left to wave the flag for gigs outside London and Glasgow on this trip, but tours are becoming more frequent, and the incentive of promoting a new album will surely engineer a return visit soon.

Opening for Hayes at this show was a singer-songwriter from South Wales by the name of Christopher Rees. Clearly influenced by a mature country sound, he successfully tapped into the sentimentality of a classic Nashville song. Honing in on staple ground and topics, he paid particular attention to the structure of songs that have trod the Broadway sidewalk for decades. A fitting support slot that set the scene for the main event, and subsequently a peerless performance from Hayes Carll.

It is now a decade since Hayes strolled onto the Glee Club stage in Birmingham to the glorious tone of ‘Beaumont’ for the perfect introduction. There will be many satisfied fans of quintessential American song writing music across the UK if the presence over here is stepped up in the next decade. The replication of this Nottingham renewal is certainly a desired legacy. In this multi accessible digital age, nothing could surpass the frozen moment of being there. It was an honour and a privilege to be present.